Covering 3,000 square kilometres in the heart of Bavaria, Altmühl Valley Nature Park is one of Germany's largest reserves. Bizarre rock formations and juniper heathland are features of this beautiful riverscape.

Altmühl Valley Nature Park is ideal for an active holiday, for example on the family-friendly, 166km Altmühl Valley Cycle Route, one of the classic German cycling trails. Or on idyllic hiking trails such as the Altmühl Valley Panorama Trail, voted Germany's favourite walking route in 2012. Or a canoe tour: the gently meandering Altmühl is the ideal river for expeditions – the ultimate in stress-free summer fun.

With churches and abbeys, stunning palaces and lofty castles waiting to be explored, culture lovers will not be short-changed either. Equally fascinating are the many testimonies to Roman times along the UNESCO World Heritage Roman Limes: country estates, forts and watchtowers have all been either preserved or restored to how they originally appeared when they lined the border wall of the Roman empire. To travel even further back in history, visit the nature park's quarries and fossil museums. Here you'll find fossils from the Jurassic seas, among them the archaeopteryx, of which the Altmühl valley has so far provided the only example in the world.

To witness the interplay of nature and culture, the Danube Gorge should be high on your list of priorities. Best seen by boat, this impressive landscape is one of the '100 Most Beautiful Geotopes' in Bavaria. The boat trips will take you past Weltenburg Abbey, one of Bavaria's ancient monasteries, which also houses the world's oldest monastery brewery.

A cycling adventure through the Franconian water wonderland » 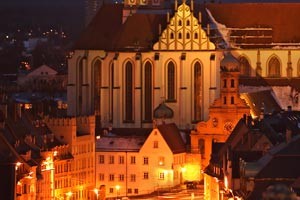 Via Claudia Augusta – One of the most important Roman roads »

Five Rivers Route - Romantic river routes »
Copyrights
top of page
Unnamed route 0 Destination(s)Length of route: 0 kmDuration: 0
Means of transport
The route cannot be calculated. Please change the route or the means of transport.
My destinations
You have not yet added any destinations to your travel planner. To do this, please use this icon
Add to travel planner
View the route in the map
Load route:
Save changes to current route?
Please add destinations to your route first so that you can save it.
Do you really want to delete your route?
URL for sharing the route:
Sharing the route via other services:
Please save your route first.
Add two or more points to the route so that you can view it in the external route planner.
Route is empty
Select view
Brief description of the destinations with image
List of destinations
Travel information
Vaccinations
Religion
Entry requirements
Customs
Language
Climate
Visa
Copyrights

Two useful shortcuts for using the zoom function of your browser:

For further assistance from your browser provider click the icon: