Almost no other natural region of Germany evokes more romantic feelings than the Rhine. A trip along the river is like a voyage into a fairy-tale land, with no fewer than 60 picturesque castles and formidable fortresses presiding over the river from the surrounding hilltops.

The most beautiful time of all is early morning, when a dawn mist wafts gently over the river. Castles are shrouded in the haze and ruins rise up from the mist like heavenly towers. Birds twitter cheerfully from the riverbanks. The first rays of sunshine shimmer on the gently flowing waters of the Rhine and ignite sparkling highlights among the fine droplets of dew covering the vineyards. 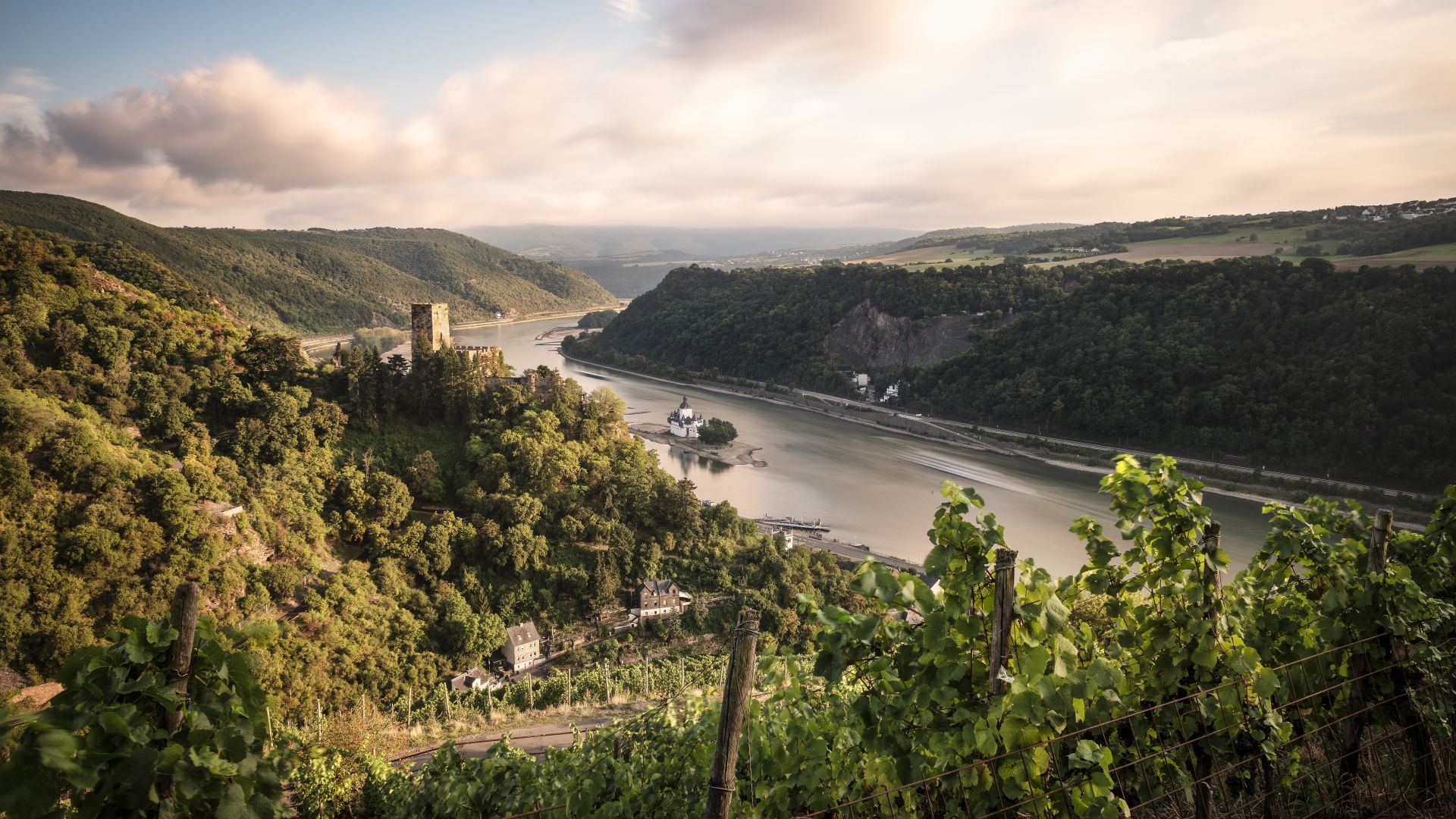 The magical and romantic atmosphere of the Rhine is almost impossible to resist. Even around 200 years ago, painters and poets of the Romantic period had discovered the fairy-tale beauty of these river landscapes between Lake Constance and the Dutch border. Philosopher Friedrich von Schlegel was impressed by the "proud castles on wild cliffs", while poet Heinrich von Kleist spoke of the "most beautiful expanse of land in Germany where our great gardeners have so clearly worked con amore". Painters such as William Turner picked up their brushes to capture the magic of these landscapes for posterity. Poets including Friedrich Hölderlin and Heinrich Heine were inspired to pen lyrical verses. With artists in the role of pioneers, the Rhine's reputation as a travel destination grew. By the start of the 19th century, a visit to the Rhine region was the highlight of the "grand tours" by English high society.

The sight of the Middle Rhine between Bingen and Bonn, carving a narrow passage through the Rheinish Slate Mountains, with vine-covered slopes, knight's castles, magnificent palaces and quaint fishing villages, thrilled the hearts of the early romantics. Today, the Upper Middle Rhine Valley from Bingen to Koblenz is a UNESCO World Heritage Site.

Lorelei: a fabulous tale of a betrayed woman with blonde hair 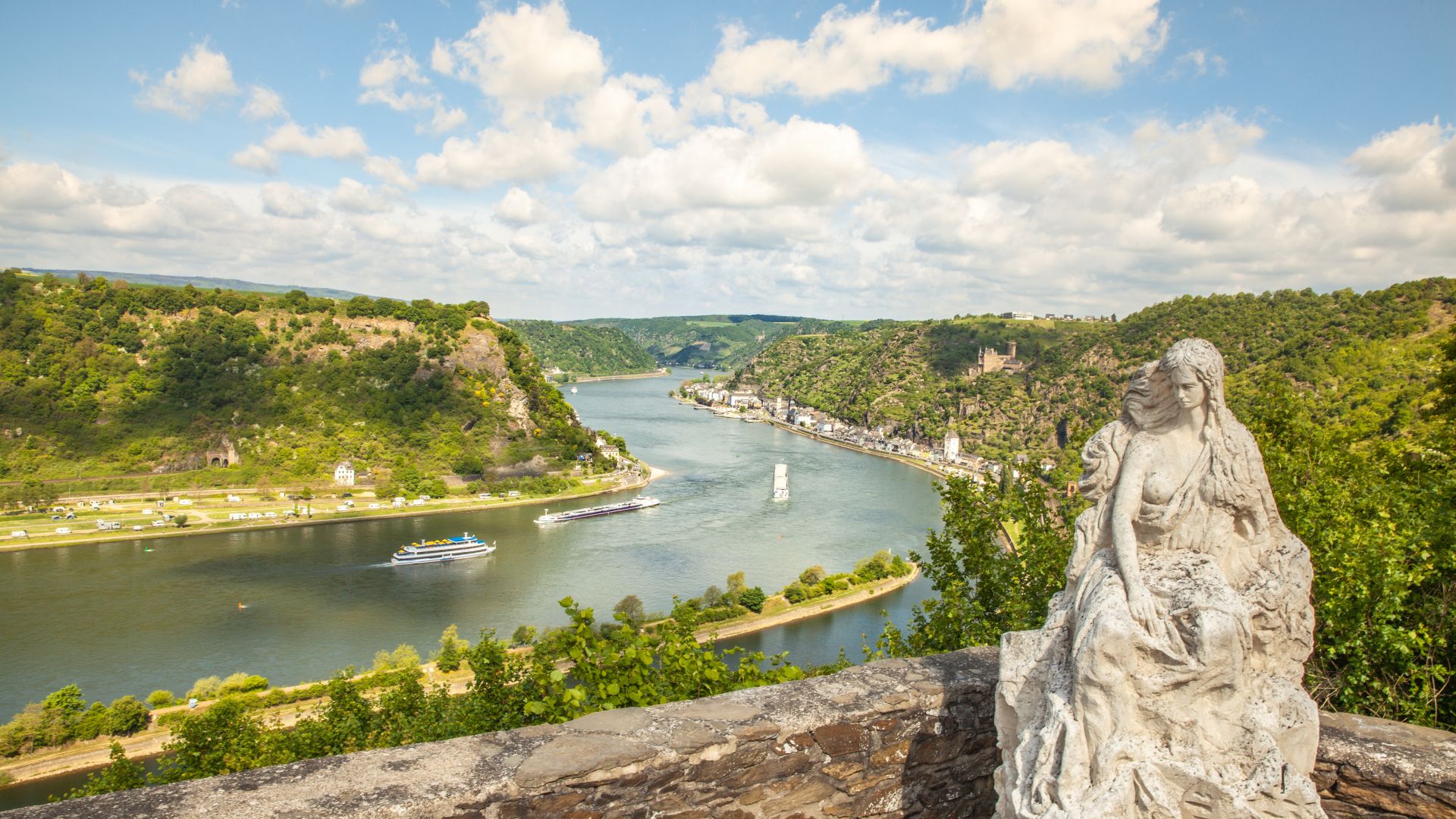 The Lorelei and the legendary slate rock near St. Goarshausen, on which the blonde-haired woman is said to have sat, are the epitome of Rhine romance. The legend was invented by poet Clemens Brentano, and made famous by his literary colleague Heinrich Heine. In the version widely known today, the hapless maiden sits high on a rock, combing her blonde hair and waiting for ships that she can lure to their doom. She is wreaking revenge on her lover, who had betrayed her and attempted to escape on the Rhine. The story also has a very real background. The place where Lorelei is said to have wreaked her mischief sits at the narrowest and most hazardous point of the Rhine, and in days gone by countless mariners capsized here in their compact flat wooden boats known as "barks". Today, the 132-metre-high Lorelei slate rock is a viewpoint with a visitors' centre. Breathtaking panoramic views over the Rhine Valley, the towns of St. Goarshausen with Katz Castle, and the neighbouring town of St. Goar and Rheinfels Castle are guaranteed.

Marksburg: a trip back to medieval times to knights' halls and castle kitchens 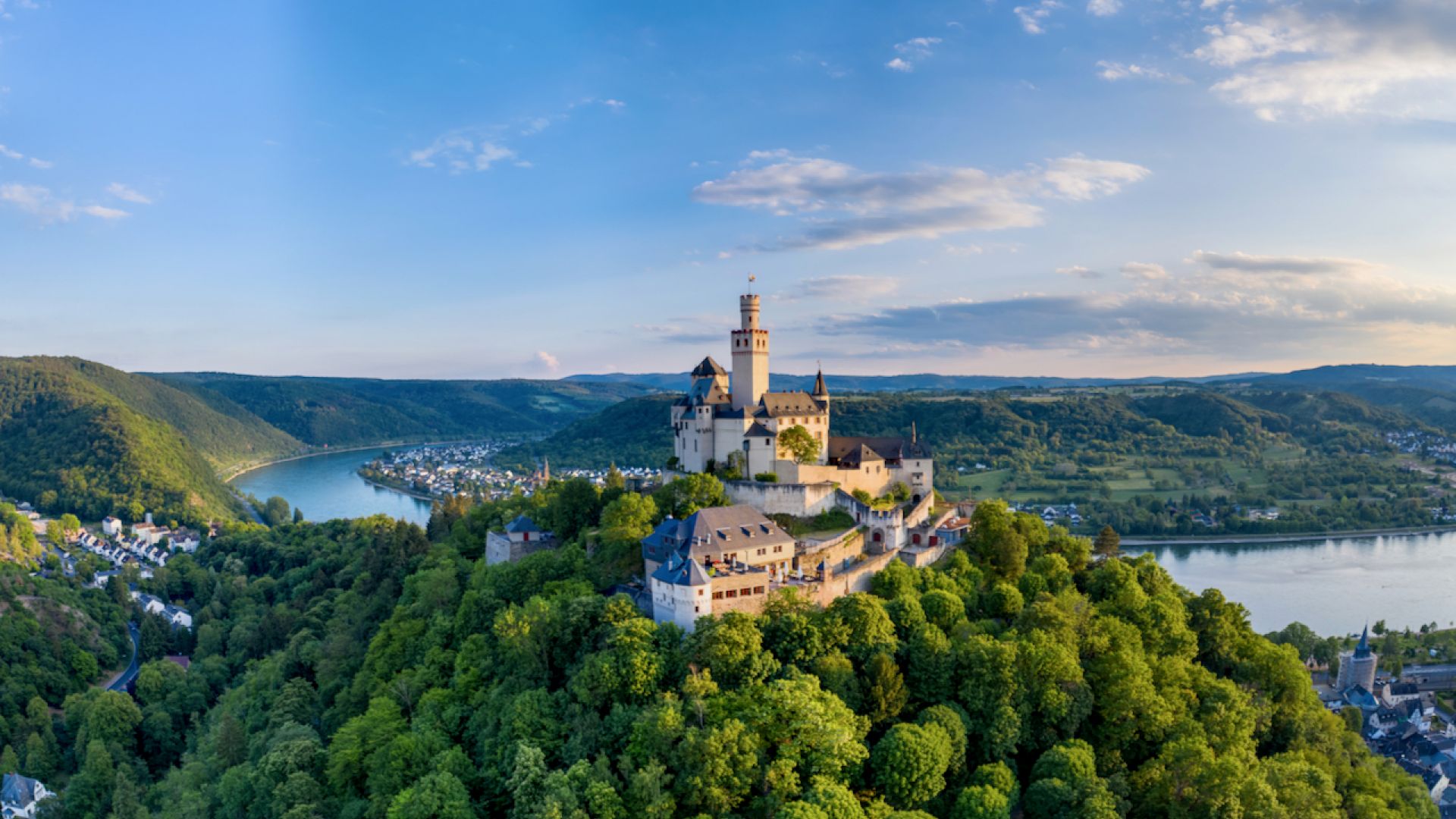 So many imposing castles and palaces line the banks of the Rhine that it's almost impossible to highlight just a few. Marksburg Castle, perched high above the town of Braubach in Rhineland-Palatinate, has a unique claim. Constructed in the 12th century, it's the only medieval castle to have never been destroyed. Presiding regally over the river from a height of 160 metres on a densely wooded slate hill, it looks almost like a stone flower stretching elegantly up towards the sky. Visitors to the castle are transported straight back to medieval times with armouries, knights' halls, tower rooms, battlements and an old castle kitchen.

Rheingau: Eberbach Abbey, featured in the film "The Name of the Rose" 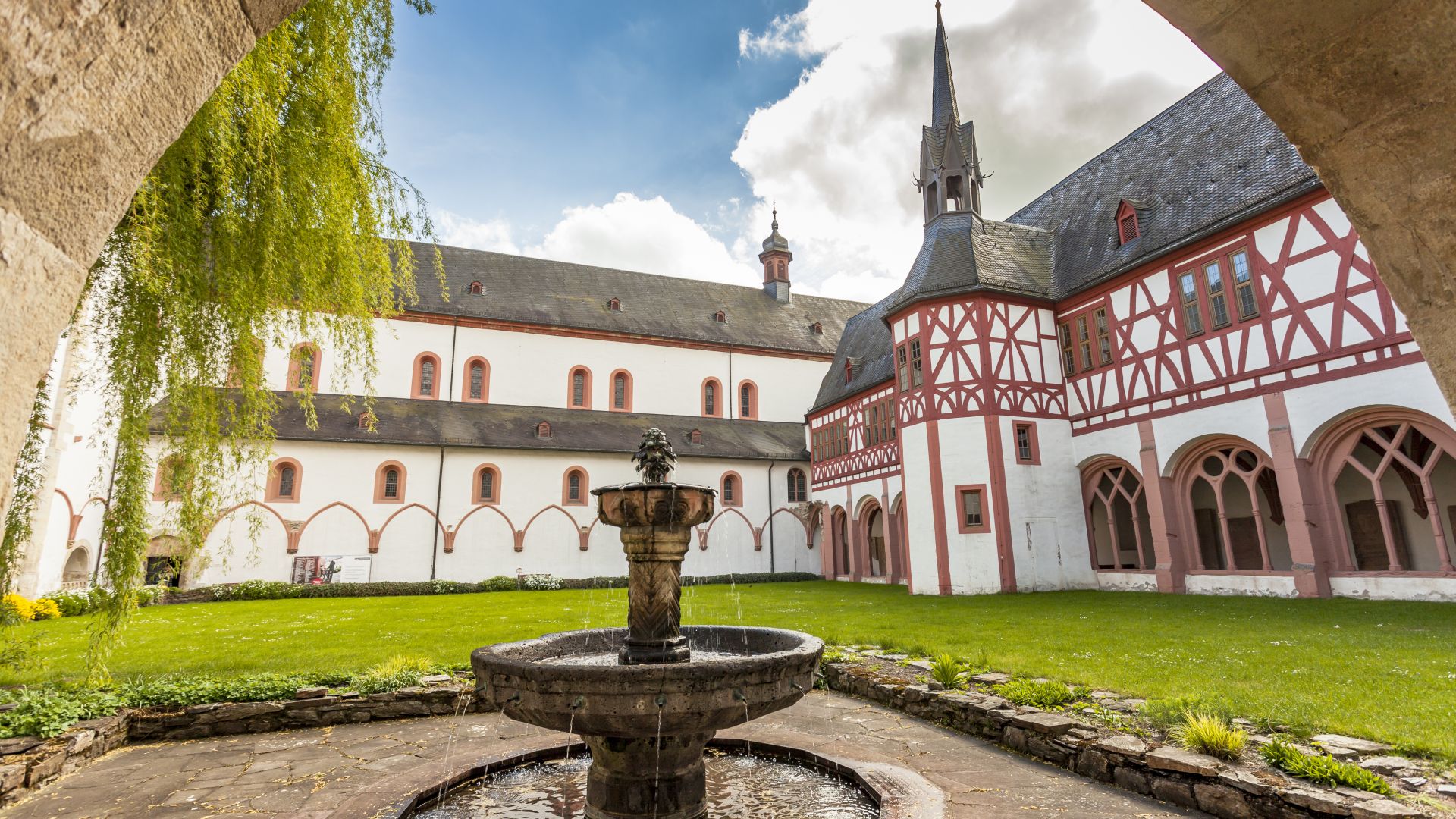 Anyone exploring the Rhine from the south will start their journey in the sunny Rheingau region, continuing through the Upper Middle Rhine Valley World Heritage Site before finally arriving in the legendary Siebengebirge mountains. A route, it has to be said, that's simply steeped in romantic charm. With its sprawling vineyards, the Rheingau region has lots to offer visitors, from wine festivals to castles, palaces, abbeys and leisurely walking trails for all ages. Designated hiking and cycling trails lead over rolling hills offering a kaleidoscope of spectacular views of the Rhine. The trails pass historic mills, through wild and romantic valleys, over vineyards and to cultural sites such as abbeys, churches, castles and fountains along the route.

The highlights in the Rheingau are Ehrenfels Castle perched on a steep slope, the Niederwald Monument in Rüdesheim (accessible by cable car), the Abbey of St. Hildegard (Eibingen Abbey) with its shop and goldsmith's workshop, and Eberbach Abbey, featured in the film version of Umberto Eco's novel "The Name of the Rose". For many international tourists, a visit to the wine-growing town of Rüdesheim is an absolute must. With its shops, bars and restaurants, the Drosselgasse street in the centre of the town is a particular attraction, filled all year round with happy crowds of people listening to buskers and sipping delicious wine.

Siebengebirge Mountains: the romantic charm of the ruins of Drachenfels Castle 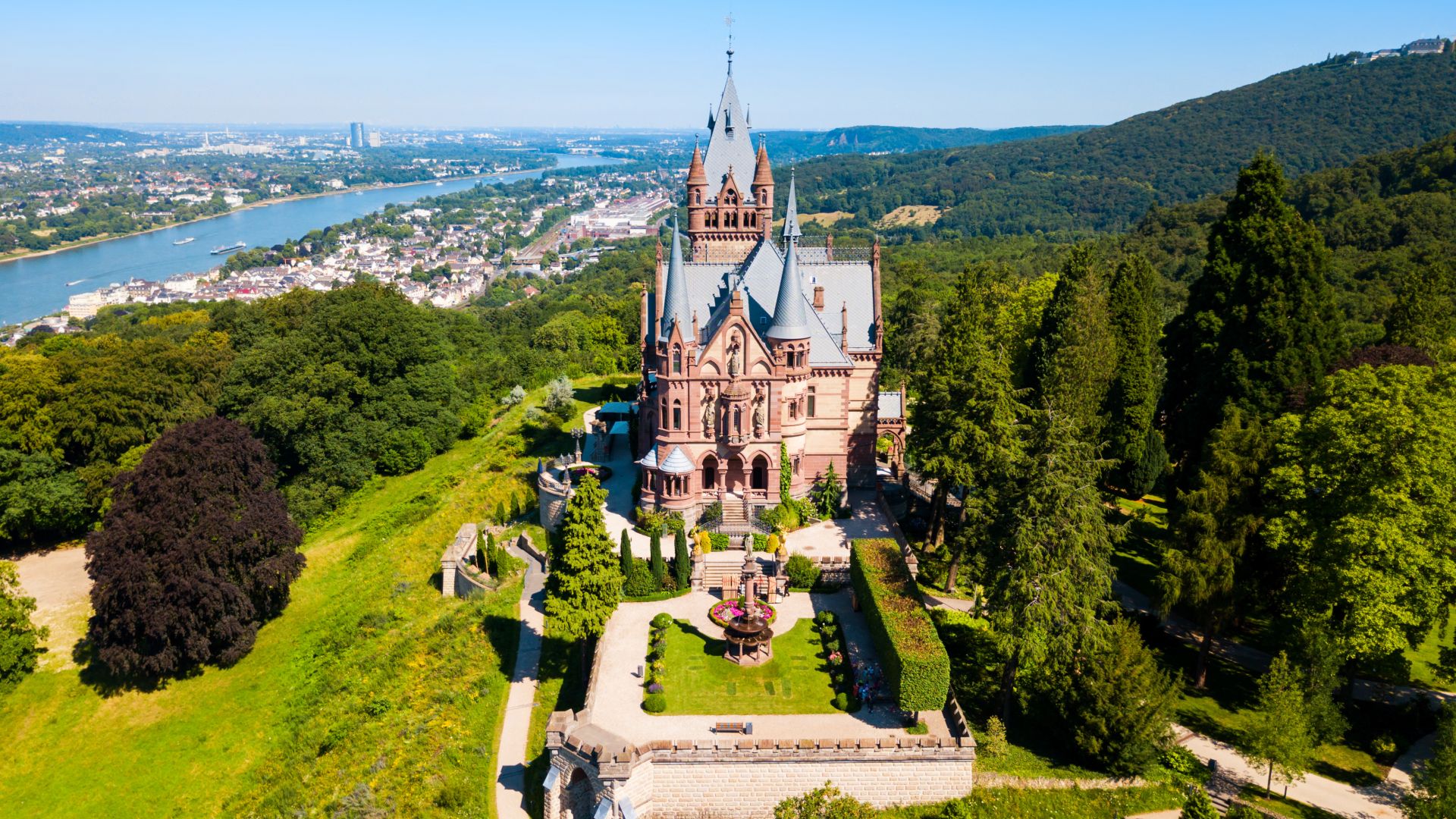 Situated to the south-east of Bonn, the Siebengebirge Mountains appear more beautiful than any painting to the romantically-minded traveller. It's now thought that the number 'seven' ('sieben' in the name) simply refers to a large amount. You can, in fact, count over 40 mountains and peaks here. The German naturalist Alexander von Humboldt described these stunning hilly landscapes as "high mountains in miniature" and was so impressed by their beauty that he wanted them to be made the eighth Wonder of the World. And travellers today still wax lyrical about the deeply chiselled valleys, densely wooded peaks, rugged cliffs, and amazing flora and fauna.

One mountain stands out in particular, the legendary Drachenfels, including Drachenburg Castle and the ruins of Drachenfels Castle. This peak inspired J.R.R. Tolkien's fantasy novel "The Lord of the Rings" as well the medieval heroic epic "The Song of the Nibelungs". This place of heroic legend lies directly above the small town of Königswinter, right beside the Rhine and just twelve kilometres south of Bonn. The Drachenfels offers lots of options for a day out: you can make your way to the top on well-constructed hiking paths or enjoy a spectacular trip on the oldest cog railway in Germany. Over a distance of around 1.5 kilometres, the route climbs an impressive 220 vertical metres. An even more romantic option, mainly for children, is a donkey ride up to the viewing plateau.

Halfway to the Drachenfels, you can stop off at Drachenburg Castle, a fairy-tale construction in historic style with turrets, oriels and battlements built in the late 19th century by an extremely rich stockbroker. Visitors can admire the magnificent interior furnishings and stroll through the extensive park. However, the main attraction is the castle's breathtaking view over the Rhine Valley, the surrounding wine villages, the ruins of Rolandsbogen (Roland's Arch), the Eifel region, the Westerwald Mountains and, on a clear day, the cities of Bonn and Cologne with the famous Cologne Cathedral.

If you climb all the way to the top of the Drachenfels, you'll find the impressive ruins of Drachenfels Castle. The remains of the stone castle stretch so dramatically up towards the sky you could almost imagine Count Dracula roaming here by night. According to legend, the cliffs were once home to a fearsome dragon who demanded that a human sacrifice be brought to him every day, until a beautiful maiden vanquished the monster. In reality, the castle was constructed in around 1147 on the orders of an archbishop from Cologne. However, its heyday lasted just 500 years. Today, visitors can enjoy gastronomic delights on the 321 metre Drachenfels, accompanied by an unforgettable view over the romantic Rhine Valley.

At the foot of the Drachenfels lies the pretty little town of Königswinter with its well-preserved old town and numerous attractions, including a large aquarium and the Nibelungenhalle memorial to the world-famous German composer Richard Wagner.

More information on the Romantic Rhine.