There are about 9,000 libraries in Germany. 11 of these are particularly worth exploring. Let us introduce you. 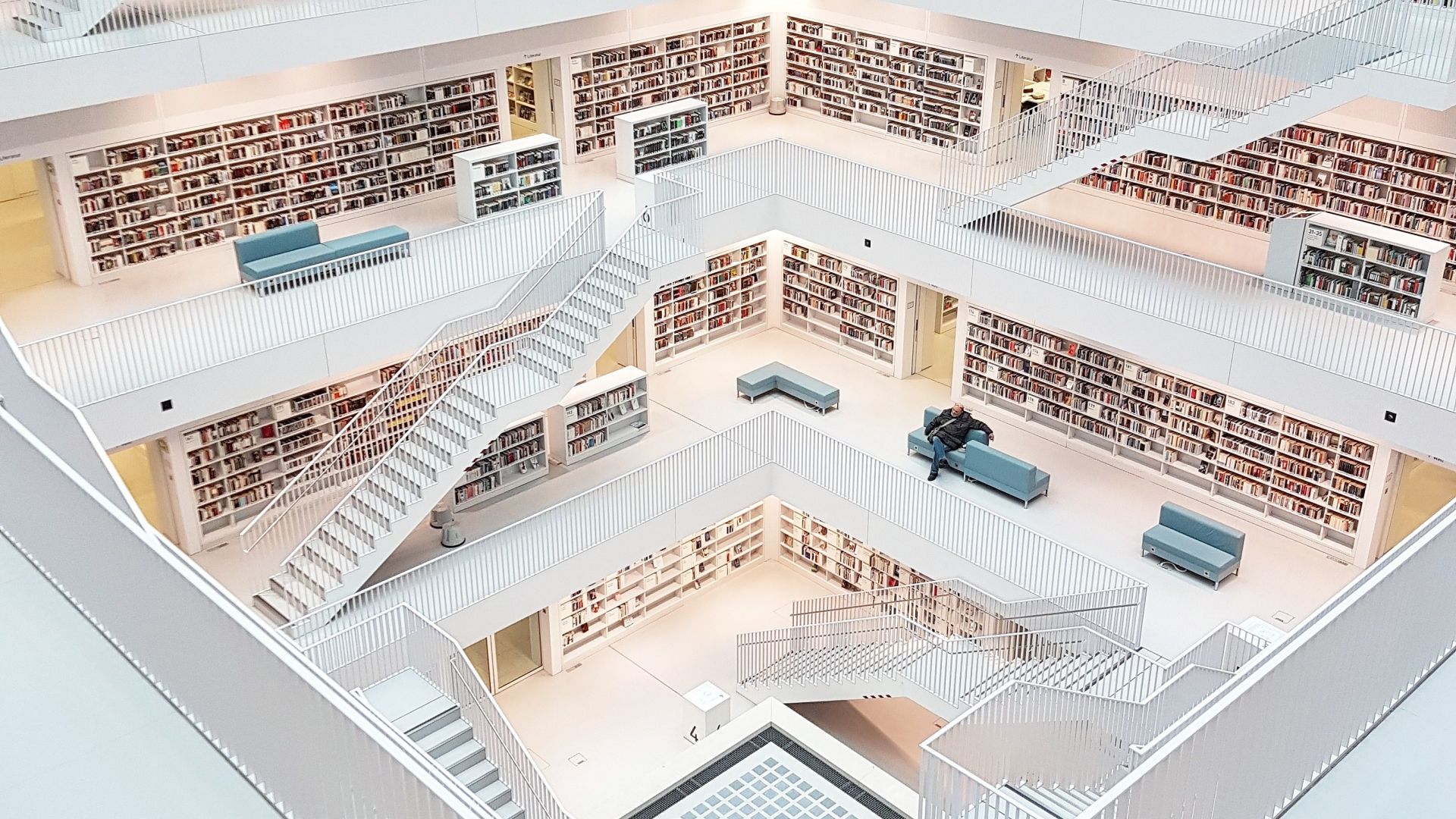 Stuttgart's municipal library is one of the most frequently photographed buildings in the city. Why? The striking futuristic design by architect Eun Young Yi looks like a cube. Its façade consists of large square panels of exposed concrete and matt glass blocks. In the evening, it becomes a luminous blue and white sculpture. The building has a remarkably beautiful interior as well, with its own children's library, music library and print library. There is a magnificent view from the freely accessible roof terrace.

This light-flooded rococo library hall is part of the Schussenried Monastery Museum and the most spectacular part of the monastery building. The ceiling fresco created by Franz-Georg Hermann is particularly impressive. It depicts in detail the journey of the church through the centuries, in 14 sections. The locked bookcases are located across two floors, and the interior design scheme was one of the richest and most extensive in the 18th century in the German-speaking world. 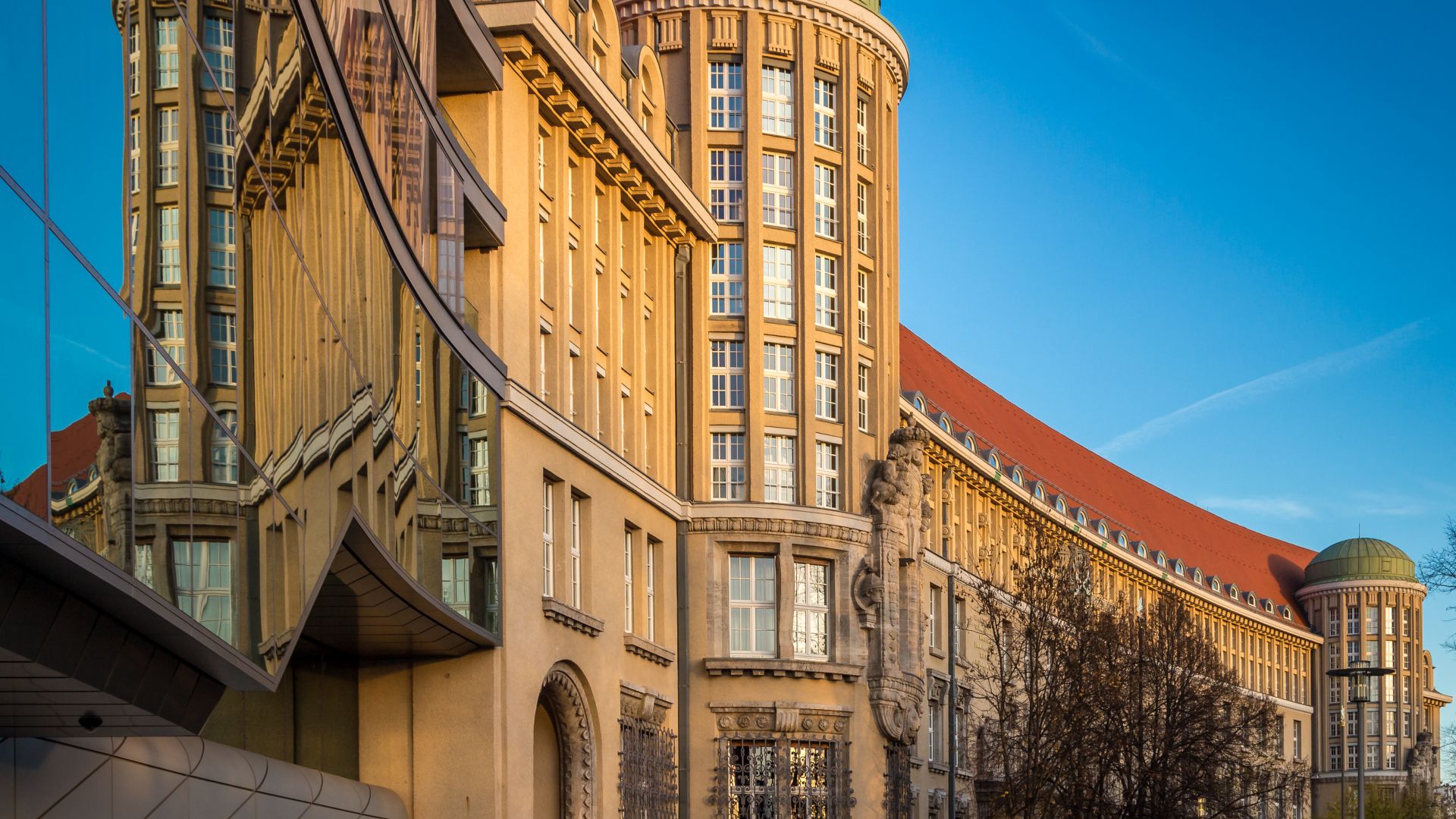 The German National Library, with its two locations in Leipzig and Frankfurt am Main, is the central archival library for all printed media in the German language. With its transparent glass skin, its four-storey new building in Leipzig is vaguely reminiscent of a book lying on its side. The original neo early-renaissance building is no less impressive.

The heart of the Oberlausitz Library is the historic book room housed within the Baroque building. Its main characteristic is its simplicity. This in combination with its wooden book arches, makes it one of the most beautiful library rooms of early classical architecture. The shelves house part of the largest working academic regional library for Upper Lusatia and parts of Lower Silesia. More than 150,000 volumes document the history, culture, art, nature, economy and society of the region.

The Jesuit library of the Maria Laach Abbey, situated in a Benedictine Abbey in Rhineland-Palatinate, is a real historical gem and is one of the best-preserved and most beautiful libraries from the 19th century. In the high, open space there are several galleries with curved balustrades, which can be reached via a stylish, cast-iron staircase. There are now 260,000 items housed here, which can be viewed by appointment. 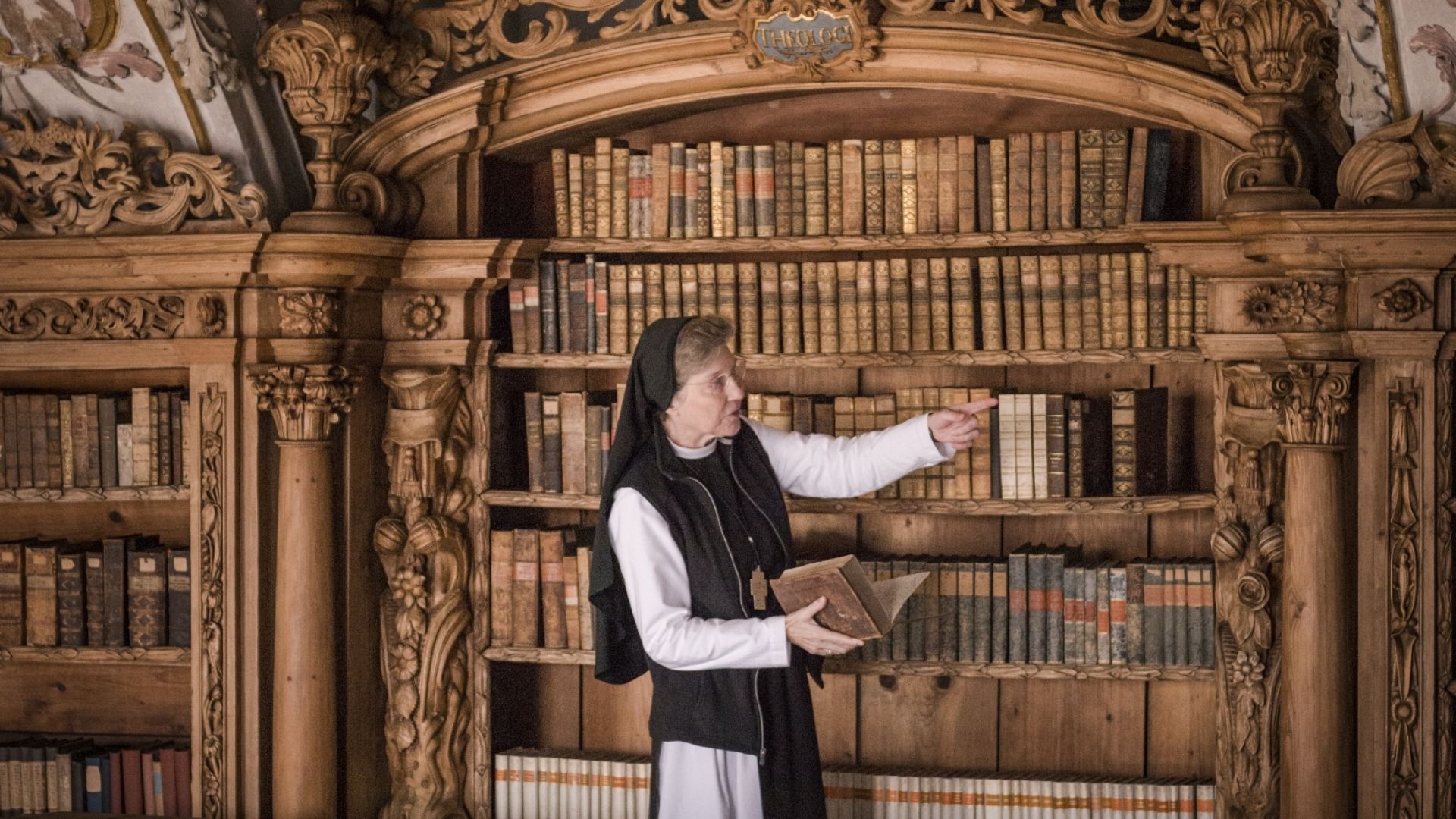 The magnificent frescoes, portrait medallions and portrait busts, and especially the ten intricately carved, life-sized wooden figures, make the Abbey Library of Waldsassen Monastery unique. The figures support the gallery of the library hall on their shoulders and symbolise the different facets of arrogance: stupidity, mockery, hypocrisy and ignorance.

The Göttingen State and University Library iis one of the largest and most important academic libraries in Germany. Probably its most valuable treasure is the Gutenberg Bible, a UNESCO World Document Heritage item. It is one of four perfectly preserved copies printed on parchment. The 1282-page work cannot be viewed in the library, but it is available in digital form on the internet.

The Herzog August Bibliothek owes its international reputation to its important historical holdings, books from the Middle Ages and early modern times. However, the library building is also architecturally interesting, as it was built in the style of a Florentine palazzo. At that time, the library was considered the eighth wonder of the world; today, it is objectively an important research site into the culture of the time. Globes and old maps are on permanent display in the museum rooms of the Bibliotheca Augusta. The HAB (Herzog August Library) also showcases the results of its research as part of special exhibitions. 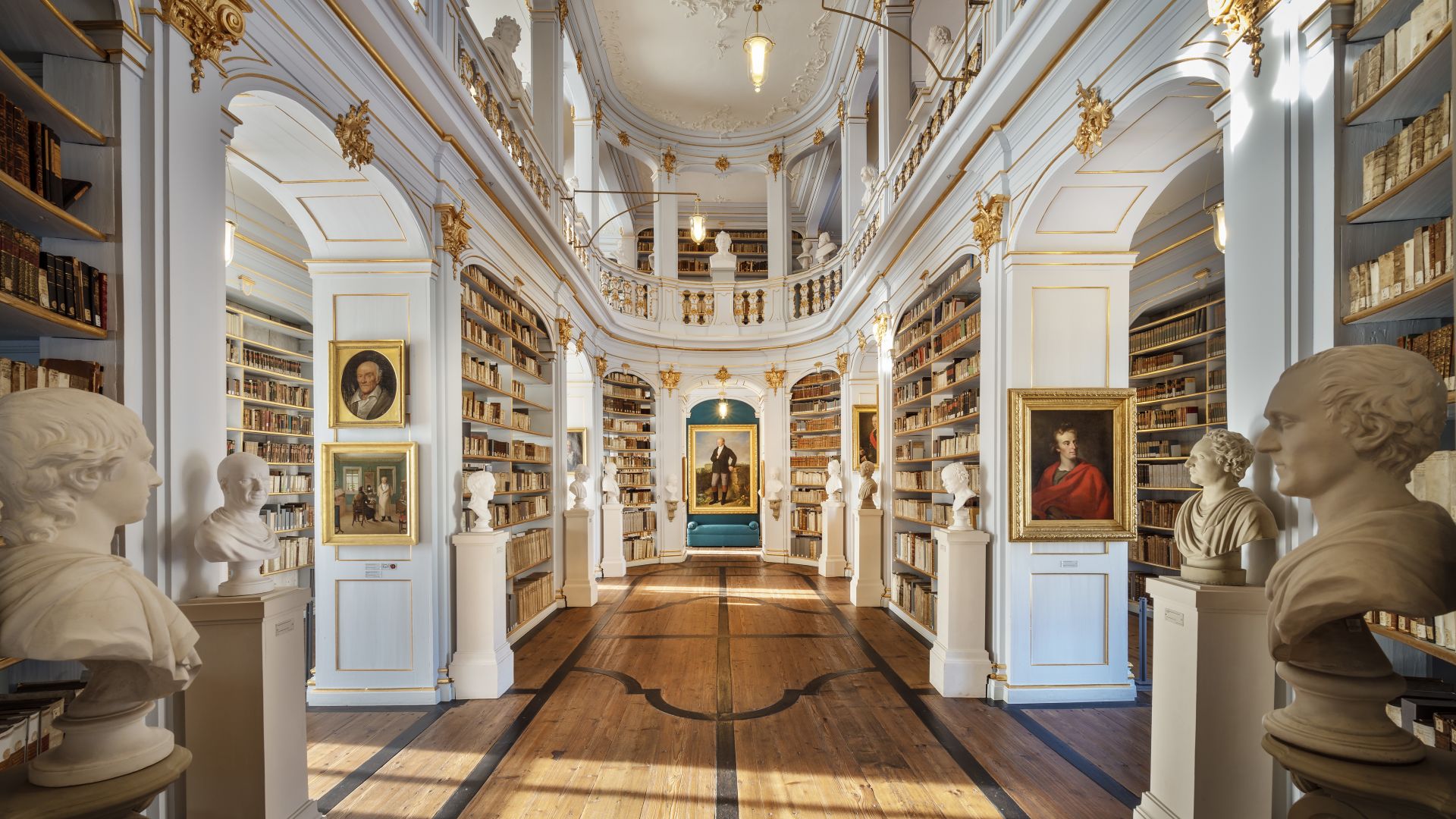 This is a UNESCO World Heritage Site and one of the most important libraries in Germany: the Ducal Library in Weimar, founded in 1691. It is famous for its oval ornate rococo hall, decorated with golden stucco and extending over three storeys. In 1779, the famous German poet Johann Wolfgang Goethe was appointed to oversee the library's work and remained in charge of it until his death.

The architecture of the library was designed by Lord Norman Foster, and because of its spectacular cranial-like shape, this library is also known as "The Brain". The building blends in with the courtyards of the 1971 university campus. The new building was constructed during the course of the modernisation of the existing building, for which the well-known architect Jean Prouvé was also responsible. The library's collection focus is on the philologies, i.e. linguistics and literary studies.

The Information, Communication and Media Centre serves as a library, multimedia and computer centre. The architecture was designed by Herzog & de Meuron and is outstanding. The outer façade of the 32-metre-high shimmering building is made entirely of glass and is printed with lettering. As plain as the outer shell is, so overwhelming is the interior. Columns and floor coverings are yellow, light green, red and dark blue and are reflected in the ceilings which are made of expanded metal.