A unique natural environment has emerged in the area around the former inner German border, a place where gentle tourism and a culture of remembrance go hand in hand.

500 metres above the Wasserkuppe, the highest peak in the Rhön Mountains, the pilot releases the rope. Below us: the countless peaks of the Kuppenrhön range. When the glider turns, you can look down almost vertically through the plastic pane and spot a meandering strip of land up to 200 metres wide in places: the Green Belt, one of Germany's largest nature reserves.

The Green Belt is an area of vegetation running along the former inner German border that separated the old Federal Republic of Germany from the German Democratic Republic for over 40 years. Following the political turnaround in 1989 and German reunification in 1990, the Green Belt took on a unique role. 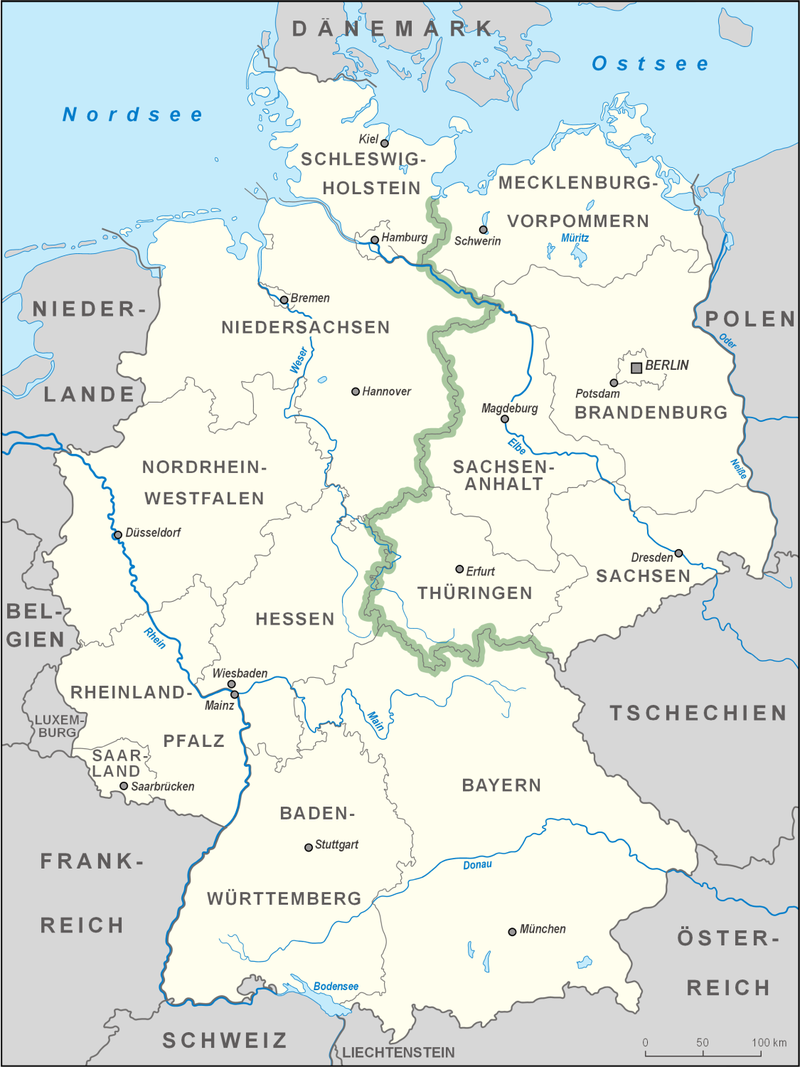 Visitors can book a ride in the co-pilot seat of a glider on the Wasserkuppe – for guaranteed amazing views. But to truly explore the Green Belt, you need to immerse yourself in this unique natural environment, and in a relic of the most fascinating and tragic history of the past century.
The Green Belt extends for 1,393 metres from the Baltic Sea beach at Priwall to the border triangle area at Hof in the Vogtland region, marking the location in Germany where the Iron Curtain divided the world into two separate halves. 44,000 soldiers patrolled here; a metal mesh fence marked the political division. There were almost 600 watchtowers, as well as thousands of landmines and spring guns. There were attempts to escape – many failed.

In the officialese of the German Democratic Republic, the border was referred to as the "control strip", while in the West it was called the "death strip". But the entire former restricted zone, which could be only be crossed with a permit, has long since been transformed into a lifeline that's open to all. In the German Democratic Republic, the area directly next to the fence was regularly ploughed and plants were removed, but in the rest of the generally isolated restricted zone nature was left to take its course.
Today, covering a surface area of around 800 square metres, the Green Belt is the largest biotope chain in Germany, with almost a third belonging to nature reserves. With the exception of high mountains, all forms of German landscapes are represented here, from low mountain ranges to north German lowlands. Numerous endangered species live in forests and moorlands, meadows and heaths, streams, inland dunes and orchid meadows, including otters, kingfishers, black storks, wildcats and species considered extinct, such as the short-tailed blue butterfly in Thuringia.

The border ran over the Brocken

The Green Belt touches a total of nine federal states, with the main part (763 kilometres) in Thuringia, followed by Saxony-Anhalt, Mecklenburg-Western Pomerania, Lower Saxony, Brandenburg and Saxony. Active holidaymakers can hike or cycle along the entire length of the Green Belt. On their way, they then follow the so-called Kolonnenweg, the path laid out with two rows of perforated concrete slabs, which was laid out parallel to the fence on the eastern side. This is where the GDR border troops patrolled. One of the most popular routes along the former inner-German border is the 90-kilometre-long signposted Harz Border Trail. Hardly a kilometre goes by without encountering a relic of the division. Right at the beginning, you discover the border tower near Rhoden, and the trail leads over the Brocken, the highest mountain in the Harz (1,141 metres), which lies in fog for 300 days.

Gentle tourism and many hiking trails

Heinrich Heine and Goethe climbed the Brocken before it became part of the restricted zone in the German Democratic Republic and the site of a Stasi listening station, commonly referred to as the "Stasi-Moschee" or Stasi Mosque – due to the dome construction on a square-shaped base. Today, the building houses the visitors' centre for the Harz National Park. The trail then continues to the Sorge open-air border museum, one of the many museums on the Green Belt, which documents history through relics such as watchtowers and border fences, as well as individual accounts.

Visitors can find a huge selection of hiking trails around the Green Belt. For example, the Rodachtal two-state trail between Bavaria and Thuringia, the Grenzlandweg trail in the "Eichsfelder Schweiz" area, and, with the ruins of Hanstein Castleat the western tip of Thuringia, even a medieval fortress that was situated in the restricted zone between 1952 and 1989. There's also the option of a bike tour close to the border region in the natural landscapes of the Franconian Forest. And everywhere the emphasis is on gentle tourism – to protect this, quite literally, historic natural environment.

One very special place is Mödlareuth, also known as "Little Berlin". For decades, in the same way as in the now unified German capital, the inner German border divided the little village that lies partly in Bavaria and partly in Thuringia. For over 30 years, crossing the Tannbach stream, which flows through the centre of the village, has been permitted once again. The "Deutsch-Deutsche Museum" (German-German Museum) in Mödlareuth is also an open-air museum featuring a section of the former border wall including fortifications

Another top tip is a hike near Geisa in the Ulstertal valley in the Thuringian Rhön Mountains to a special destination: Point Alpha, previously the hottest point of the Cold War, now a memorial site. Point Alpha, on the Hessian side of the Rhön, was one of the most important NATO observation posts. It was situated in the middle of the "Fulda Gap", a defence line where NATO would have prepared for any invasion of Warsaw Pact troops. Anyone cycling along the Iron Curtain Trail will pass this site, on a route running from the Barents Sea to the Black Sea.

A preserved natural environment combined with traces of world history in a culture of remembrance is unique. "I cannot imagine a more fitting monument for a vanquished German-German border than a large national park extending from the Baltic Sea to the Thuringian Forest", said the famous German nature filmmaker Heinz Sielmann in 1989, an early advocate for protection of the Green Belt.  Thuringia was the first federal state to designate the Green Belt a National Nature Monument in 2018. Efforts are currently being made not only to declare the entire length of the Green Belt a Nature Monument, but also a UNESCO World Natural Heritage and World Cultural Heritage site.
By the way: you don't necessarily need to go up in a glider to get a clear overview. From the Thüringer Warte, a lookout tower in the Bavarian part of the Thuringian Slate Mountains, you can also very clearly make out a strip of the now wild and sprawling former border – the Green Belt.