The business impact of the war in the Ukraine

The first quarter is traditionally the time when we receive extensive data that enables us to take stock, review the lessons learned over the past twelve months and adjust forecasts for the current year. The ITB at the beginning of March is the occasion when we can rev up the business with our international partners.

In 2022, the analysis of the international travel industry, supported by market researchers, academics and industry experts, resulted in optimistic forecasts. Even though the ITB was held as a virtual event for the third time in a row, it was clear – after two years of seemingly endless uncertainty due to the pandemic – that everyone was gearing up for a restart.

In February 2022, our key messages were:

And then the world appears to stand still for a moment. All diplomatic efforts come to nothing, and Russia launches an attack on Ukraine.

We have been following the news since the start of the war and maintained a dialogue with partners in the markets and in Germany. We have also formulated a pan-European position in collaboration with the European Travel Commission.

The events unfolding in Ukraine are a catastrophe. Our sympathy and solidarity go out to the inhabitants of the country, the people defending it and all those who are now fleeing their homeland. We appeal to those responsible to end this war immediately.

Today, I would like to share with you some thoughts on the status of inbound tourism to Germany and the potential impact of the war.

Tourism in times of crisis

Global tourism has already experienced many difficult situations that have also affected travel to Germany, such as political unrest, terrorist attacks, economic crises and natural disasters.

The experiences from the war in Yugoslavia in the 1990s, the 9/11 attacks, the tsunami in South Asia in 2004, the financial crisis in 2008/09, the Arab Spring in 2011 and the terrorist attacks in Europe in 2015/16 tells us that popular tourist destinations can expect a decline after such events. But the industry has also learned to manage crises.

Some examples from inbound tourism to Germany illustrate this: After the collapse of the European Monetary System in 1993, overnight stays fell by 9.1 per cent within one year and took six years to recover. The bursting of the dot-com bubble and the 9/11 terror attacks caused a drop in overnight stays of 4.4 per cent. This time, only two years passed before they reached pre-crisis levels again. The 3 per cent fall in overnight stays during the global financial crisis in 2008/09, following the collapse of Lehman Brothers, was recouped as early as 2010. 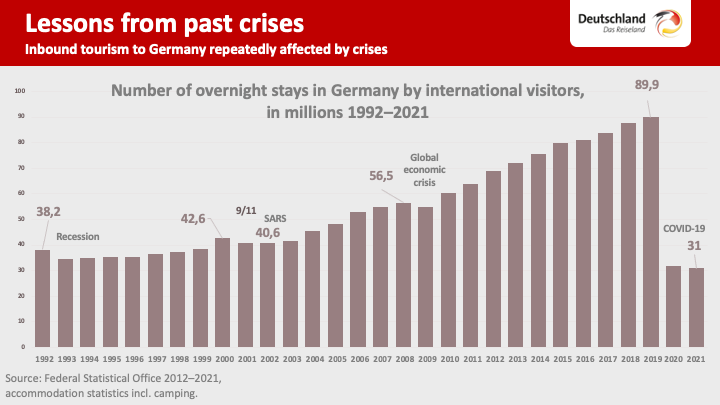 Tourism can help to cushion the consequences of crises and revive the economy in affected regions. And time and again, tourism has proven that, commercial aspects aside, it helps to forge cultural bonds and promotes understanding among nations.

As the catastrophic floods and severe storms of recent years have shown, climate change also has an impact on tourism. That is why responsible tourism always takes economic, environmental and social factors into account.

The COVID-19 pandemic triggered the biggest crisis that global tourism has ever faced, and the many years of consecutive growth came to a sudden end. According to the United Nations World Tourism Organization, the number of international arrivals dropped by 72.7 per cent in 2020, the first year of the pandemic. The figures recovered by 3.8 per cent year on year in 2021.

There are a number of reasons why COVID-19 caused such a severe crisis: the economic fallout, the regional spread, the market-specific factors and the management of the health crisis in the affected countries.

During the past two years of the pandemic, we have worked tirelessly with our partners in Germany’s inbound tourism industry and the international travel trade to prepare for a successful restart. Activities include the virtual empathy campaigns for end customers during the lockdowns, but also the investments in digital transformation, the positioning of Germany as a sustainable destination in the international market, and the ongoing exchange of knowledge with the travel industry, for example through market insight webinars, speed networking and many other initiatives.

Towards the end of 2021, the end of the lockdown brought with it an immediate surge in demand from European source markets and the USA. This was in some cases significantly higher than the figures for 2020, and made up for a large part of the losses from the first half of the year.

Countercyclical marketing has once again proven essential to success during and after a crisis.

Our experiences in 2020/21 also show that strong market segments are more resilient. City breaks in Germany, for example, increased by 16 per cent compared to a drop of 4 per cent in this segment across Europe. This also give us motivation to expand the campaigns with which we promote Germany as a destination for holidays in nature, as well as our sustainable and barrier-free offerings and Germany’s rural areas. 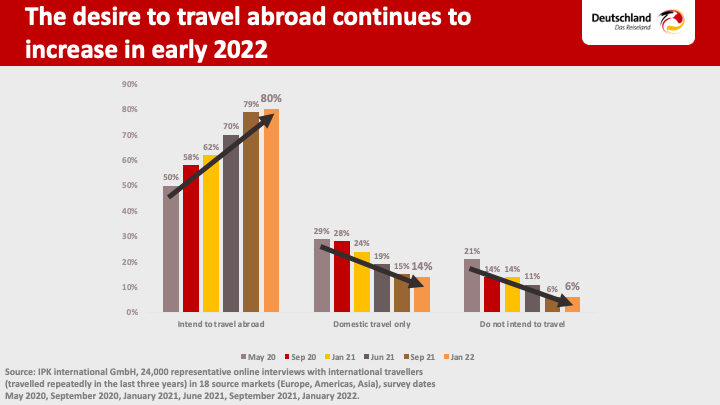 IPK International’s latest research into the impact of COVID-19 on international travel, conducted in January 2022, shows that the desire to travel is still very high. The survey also shows that 80 per cent of respondents would consider travelling abroad this year, compared to only 62 per cent in January 2021. Over the same period, the number of respondents who only want to travel domestically fell from 24 per cent to 14 per cent, while the number of non-travellers dropped from 14 per cent to 6 per cent.

A look at the market segments and the source markets reveals that customer preferences are changing. According to Destination Brand 21, people in Germany’s key source markets are a lot more interested in sustainable holiday experiences than they were back in 2018.

This is also confirmed by the GTM Expert Panel, for which the GNTB surveyed 259 CEOs and key accounts in the international travel trade in January 2022. Around half of decision makers have already noticed a slight shift in customer bookings towards sustainable products and services. Three quarters of respondents expect demand to increase in this segment over the next three years. As these experts rate Destination Germany as the clear no. 1 for sustainable travel, we are well positioned to benefit. The task now is to develop even more offerings that meet this need.

Russia established itself as a growth market in the international landscape after the turn of the millennium. Economic prosperity and political openness enabled strong growth rates in outbound tourism, and inbound tourism to Germany was one of the beneficiaries.

In 2013, the number of overnight stays by Russian visitors in Germany reached a high of 2.6 million. The embargo imposed after the annexation of Crimea caused this figure to fall rapidly to 1.5 million by 2016, and it only recovered slowly to 2.0 million by 2019, never reaching pre-crisis levels. At the end of 2021, after two years of the pandemic, Russia was 21st in the ranking of Germany’s European source markets, with 268,000 overnight stays. This trend reflected the trajectory of the rouble, which came under increasing pressure against the euro right up to 2016 following the annexation of Crimea. The rouble then recovered for a short time, before collapsing again at the start of the coronavirus pandemic. 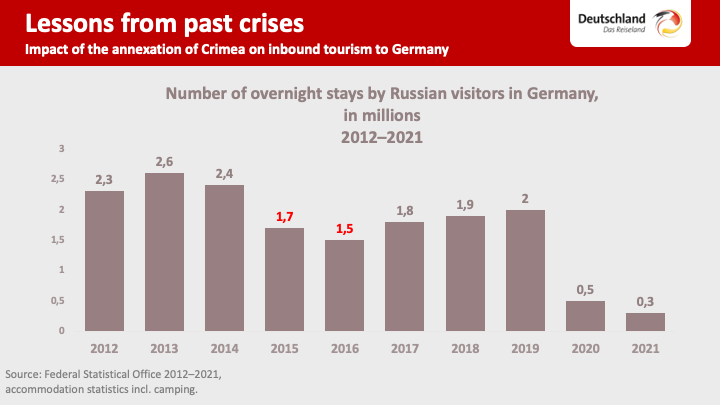 Consumer spending during trips to Germany from the two markets added up to around €3 billion in 2019, most of which benefited small and medium-sized enterprises in the tourism industry.

The first sanctions against Russia have already brought air travel between Germany and Russia to a standstill. Realistically, we have to assume that there will be a shift in inbound travel from Russia and Ukraine.

The latest trends at a glance (as at 28 March)

According to research by ForwardKeys, there has been a sharp decline in flight bookings to countries close to Russia, Ukraine and Belarus. Flight bookings to the Baltic States and Hungary fell by 30–50 per cent, and to Poland, Slovakia and Romania by 10–30 per cent in the two weeks from 24 February to 9 March 2022, compared to the previous two weeks.

Flight bookings to Germany have largely remained stable, while cancellations have so far not been significant, with the exception of those from Russia, Ukraine and Turkey. (Source: ForwardKeys, 18 March 2022)

It remains to be seen how the current economic situation in many source markets will affect outbound travel.

Across all countries, higher inflation due to the rise in energy and food prices, the impact of supply bottlenecks on the price of goods, and higher transport costs have combined to reduce the income available to spend on travel. (Source: Eurostat)

Oxford Economics has already significantly revised its forecasts for global GDP downwards. Global GDP is now expected to fall by 0.4 per cent in 2022 and 0.9 per cent in 2023.

The price of kerosene has risen dramatically since the outbreak of the war in Ukraine. At US$ 150 per barrel on 21 March 2022, it is around 121 per cent above the level in 2021 (IATA). Flights may become more expensive once existing price hedging expires, as is already becoming apparent with some airlines.

An initial survey of the travel intentions of Europeans, conducted between 1 and 13 March 2022 after war had broken out, shows an upwards trend, with around 56 per cent of Europeans intending to travel within Europe in the next six months. This is a marked rise of six percentage points since the last survey at the end of December 2021, when the figure for travel intentions was around 50 per cent.

The war in Ukraine is influencing Americans’ intentions to travel to Europe: 20 per cent are expected to postpone their holiday plans to Germany and 13 per cent are expected to cancel them, according to a recent survey by MMGY. 47 per cent of Americans are taking a wait-and-see approach to their travel plans to Europe. The survey was conducted immediately after the outbreak of war. 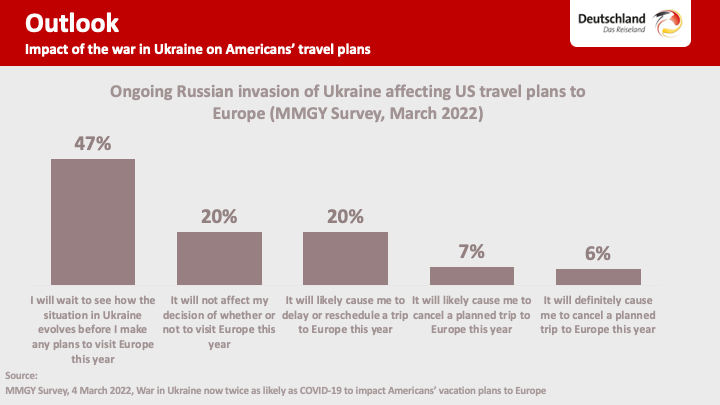 Flight bookings by Americans to Europe dropped in the week that hostilities began. They have since recovered again (sources: ForwardKeys, IATA).

The airline industry is keeping the supply of flights from the USA to Europe high, and there have not been any significant adjustments to capacity here (source: ForwardKeys).

Outlook for 2022: sustainability and digitalisation are the basis for the restart and for future-proof tourism

We have defined the following challenges and areas for action in 2022: A purely quantitative market recovery can no longer be the top priority. Our sector is aware of the calls to build back better.

The impact of the war in Ukraine has made the challenges of achieving a successful restart even tougher. Nonetheless, customers in our international source markets are indicating that they definitely want to travel after two years of the pandemic.

This motivates us to promote tourism’s standing as an inherently peaceful activity with an ability to bring people together, and its importance as a symbol for openness and tolerance. Which is why we have chosen this moment to relaunch our German.Local.Culture. campaign. It conveys exactly this message – one of harmony between generations, traditions and different cultural influences. It blends the lifestyle of urban spaces with the charm of rural regions and the draw of sustainable tourism.

By providing a wide range of inspiration for travellers in the target markets, the campaign also promotes Germany as a destination for longer holidays for the culturally minded, for families and for people who like to get active.

In his opening address at the ITB, which was held as a virtual event for the third time, the Federal Minster for Economic Affairs and Climate Action, Robert Habeck, said: “There is no better counterweight to war than tourism, as it is – by its very nature – an exercise in experiencing and appreciating another person’s culture.”

We couldn’t agree more. We are working closely with our partners to promote Destination Germany through digital initiatives, long-term commitment and creative marketing.