The stories of Cinderella, and Hansel and Gretal, still touch people's hearts to this day. But Germany also has the right setting for a fairytale. Read on to see what there is.

The castle could not be more perfectly situated: in the middle of a lake on a small island. Film director Václav Vorlícek reached the same conclusion and shot the world's best-known fairytale film, Three Wishes for Cinderella, at Schloss Moritzburg in the 1970s. His version is one of Germany's favourites, and the baroque hunting lodge with four towers built by King Augustus the Strong was the original filming location. So if you want to see first-hand what the staircase looked like on which the wise Cinderella lost her shoe, you should definitely visit this fairytale castle near Dresden. You can imagine Cinderella dancing with her prince. 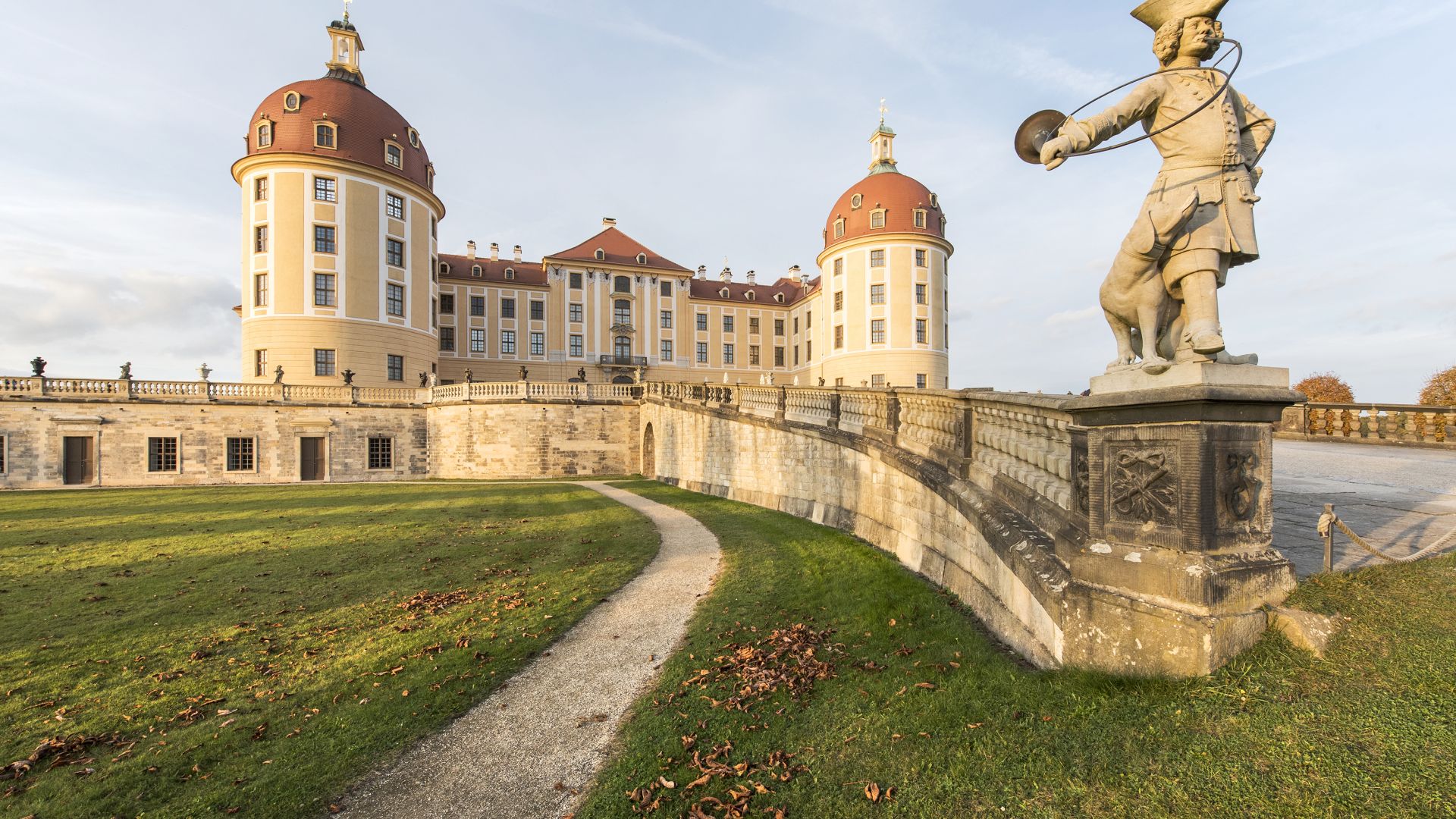 Another classic is of course Snow White: the plot of this fairytale thriller is fairly well-known: a mean stepmother who doesn't shy away from murder, and kindhearted dwarves who shelter Snow White. And then of course, the fatal apple. The castle where the jealous stepmother consults her mirror is called Kriebstein Castle. At least, that was the setting of the fairytale movie. The time-honoured walls are Saxony's most beautiful medieval castle and as dramatic as they are fascinating, after all, it sits towering on steep cliffs. In 2018, the fairy tales "Eisenhans" and "Der süße Brei" were also filmed here. 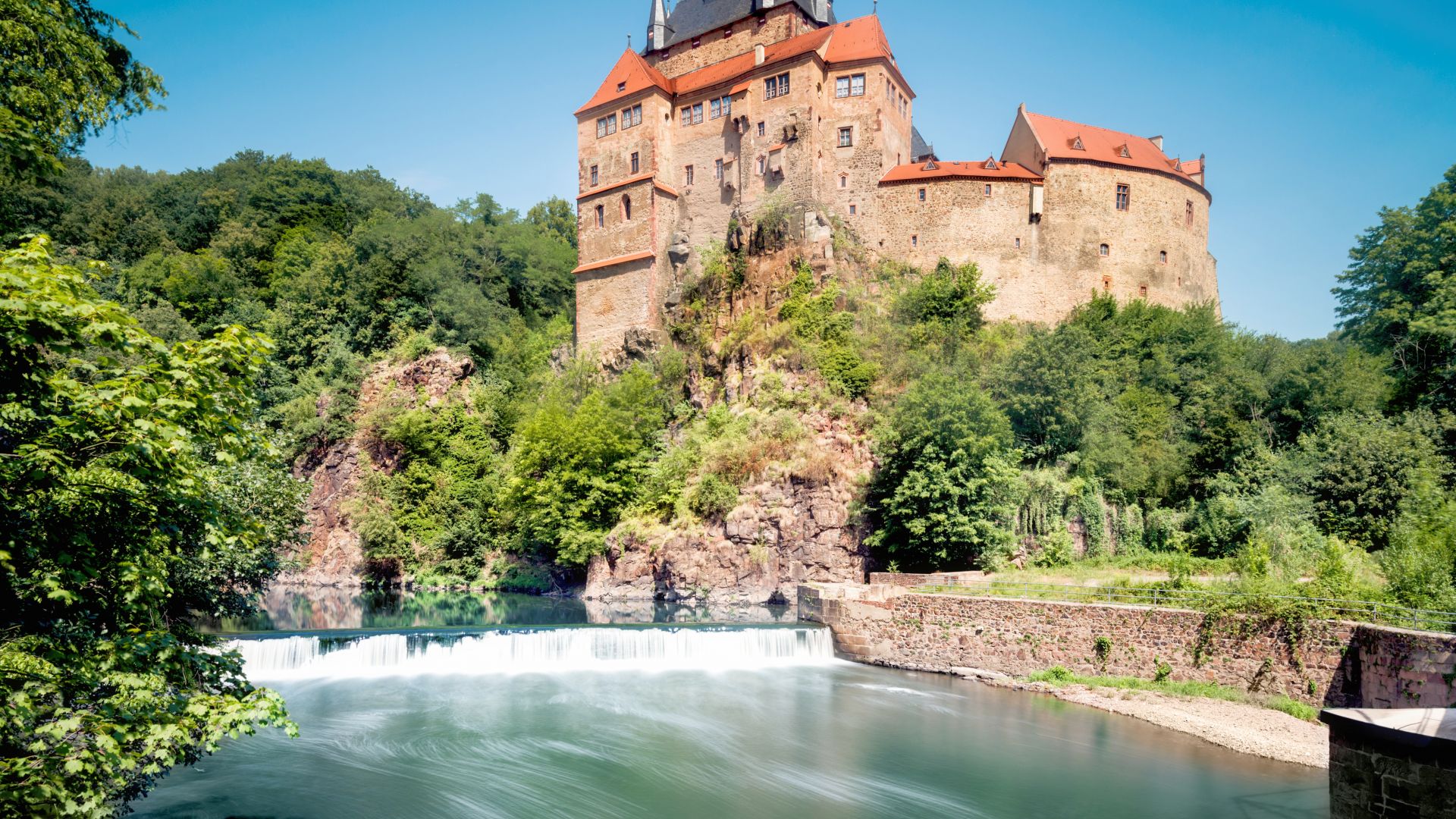 There is hardly a fairytale in which the central character does not have to solve a riddle in order to finally find happiness. This is no different in The Clever Farmer's Daughter. It takes time for her to warm the heart of the stubborn king. The story was also turned into a film. The filming locations were Waldenburg Castle in the county of Zwickau in Saxony and the Barockgarten Grosssedlitz in Heidenau. Those who visit it will be rewarded with enchanting experiences, because with more than 60 sculptures, water features and 400 potted plants, it is one of the best-preserved baroque gardens in Germany. Against this fairytale backdrop, one can imagine the story playing out wonderfully in the mind's eye. 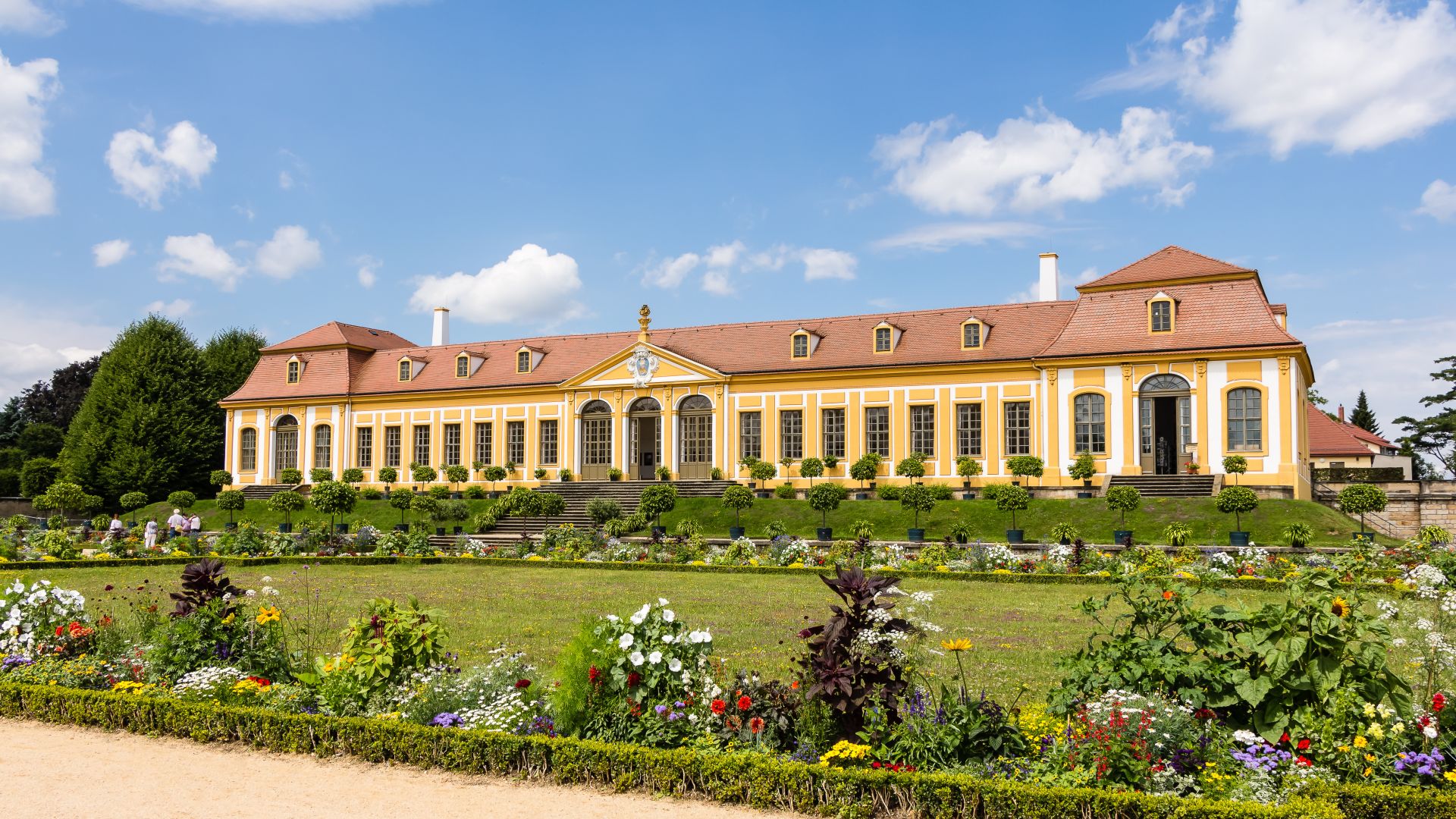 "King's daughter, youngest one, open up for me" - what may sound like a fairy tale at first must have been sheer horror for the beautiful king's daughter: for the figure shouting this is a frog. And this frog wants to be near the princess. The fairytale "The Frog Prince" has only just recently hit German screens. The filming location was the Schloss Favorite Rastatt near Baden-Baden in Baden-Würrtemberg. This baroque palace with its spacious garden was the ideal place for a carriage with white horses to drive up. Because as is thankfully the case with fairytales, the frog turns into a prince. All's well that ends well. The palace, however, with its furnishings and outstanding permanent collection, is considered to be a work of art of the highest order in Europe. 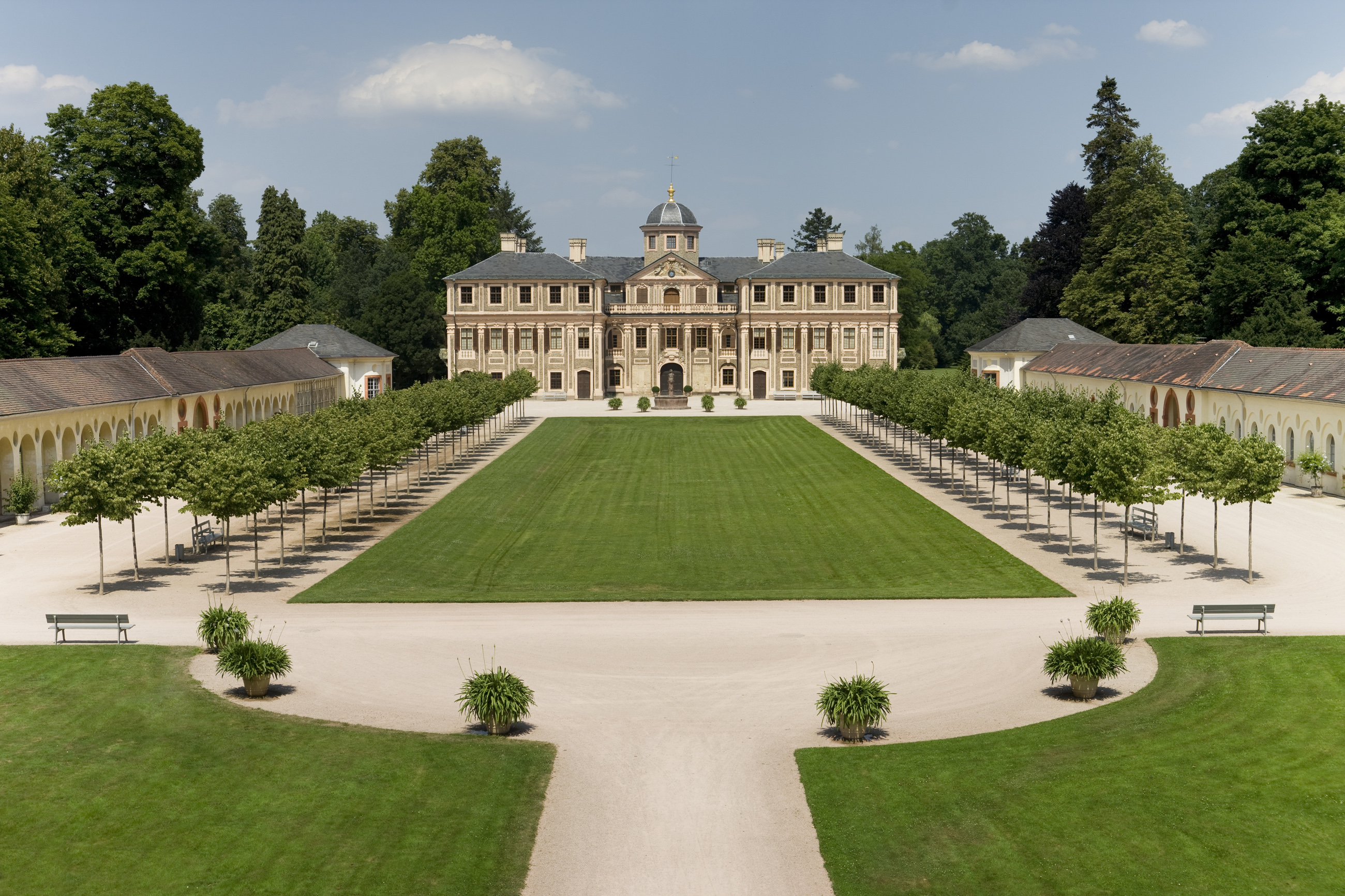 The fairytale of Sleeping Beauty has had many film adaptations, the first being in the summer of 1970. The outdoor scenes were filmed at Hartenfels Castle in Torgau and no setting could be more beautiful. This Saxon Renaissance masterpiece lies at the foot of the Elbe and appears just as peaceful as it did in the fairytale over a long period of time: after all, all the inhabitants fell into a deep sleep for 100 years. Then along comes the Prince and breaks the spell. If you want to see first-hand where Sleeping Beauty pricks herself on the spindle, you should visit the castle and take a look at the cantilevered staircase. It leads to the chamber of the 13 fairies. Kissing is also allowed there. 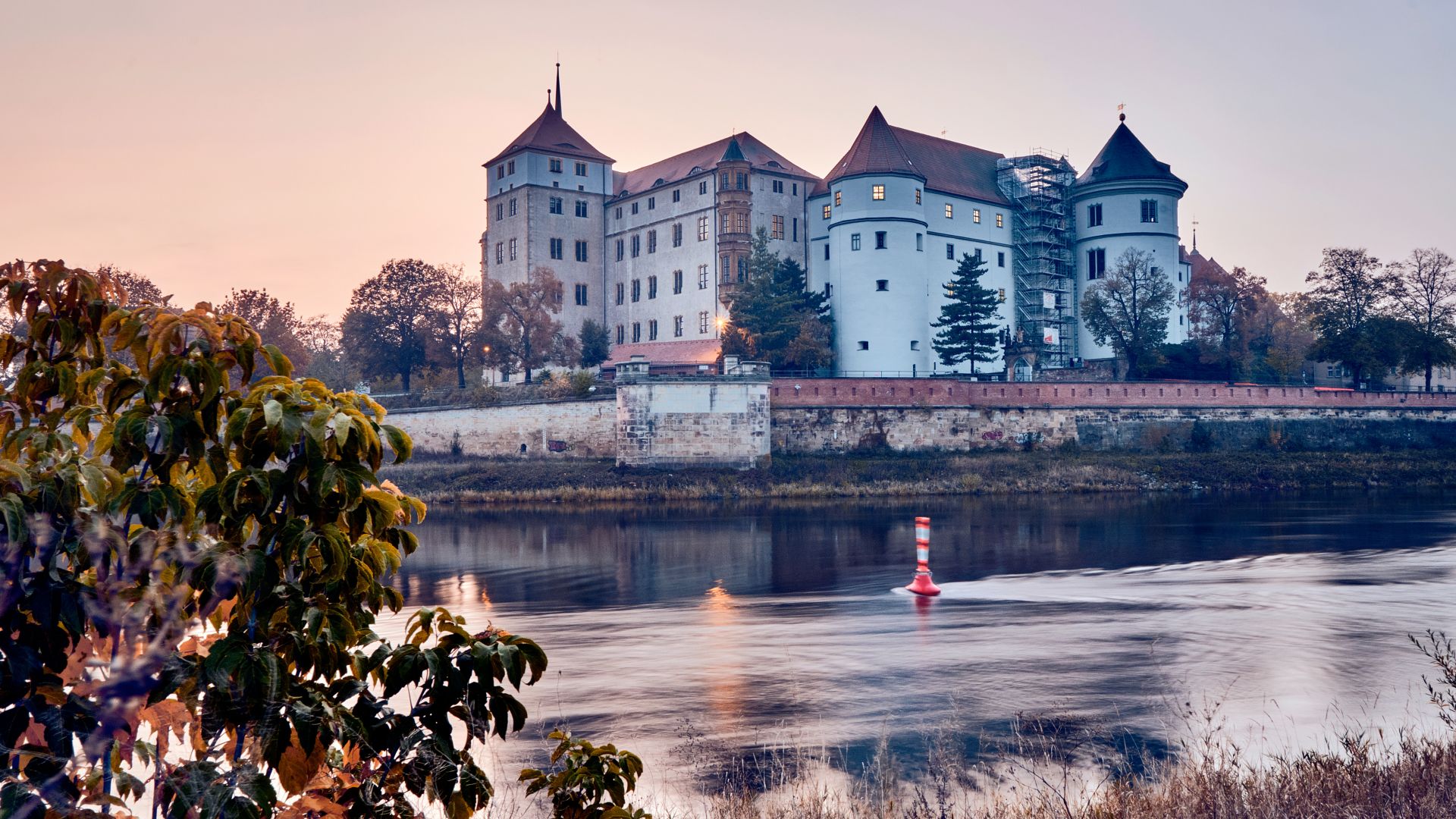 Torgau: Hartenfels Castle on the banks of the Elbe at sunset ©Adobe Stock (Michael)

The fairytale about the princess who couldn't laugh is somewhat less well-known, but also very beautiful: it was first filmed in 1953 and the medieval Trausnitz Castle in the Bavarian town of Landshut was chosen as the setting. It looms over the Old Town and it is definitely worth seeing with its open galleries, arcades and frescoes. Even if the fairytale of the golden goose teaches us that ostentation does not bring us happiness. In 2013, the fairytale was filmed again, this time at Burgk Castle on the Saale. Built in the Renaissance style, the modest building towers high above the landscape and gives an uninterrupted view of the river Saale, rolling hills and lush green fields. A perfect place, then, for a melancholy story that then ends - so beautifully - with a smile. 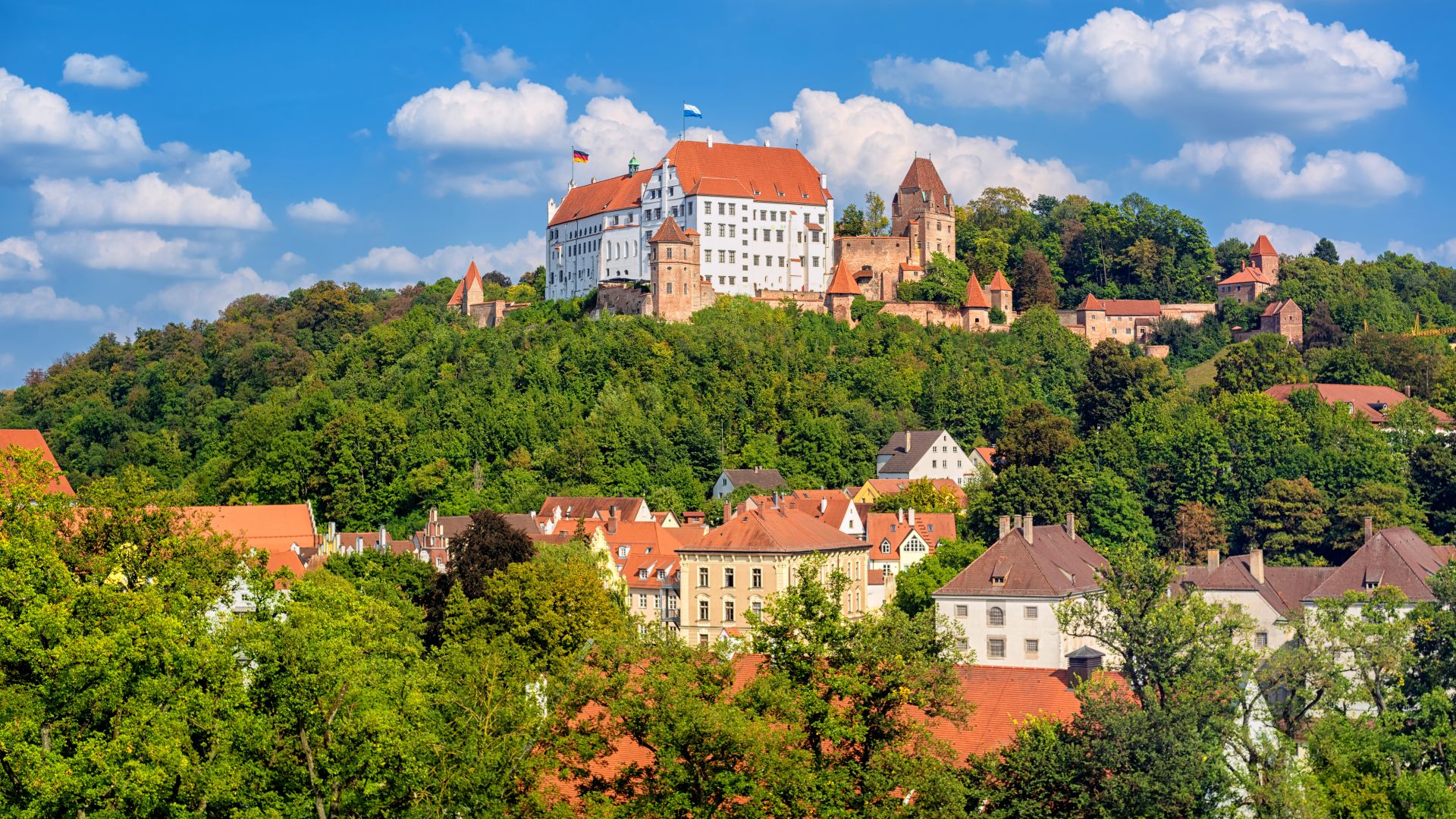