From Beginners to Advanced Skiers, in Germany there are slopes where even the pros will work up a sweat. Nevertheless, where are they? An Overview: 6 German Provinces and their Snow Zones.

If you would like to put on your skis and race down a slope in Germany: let's do it! There are plenty of ski resorts in Hesse, Saxony, Lower Saxony, North Rhine-Westphalia and especially in Bavaria and Baden-Württemberg. 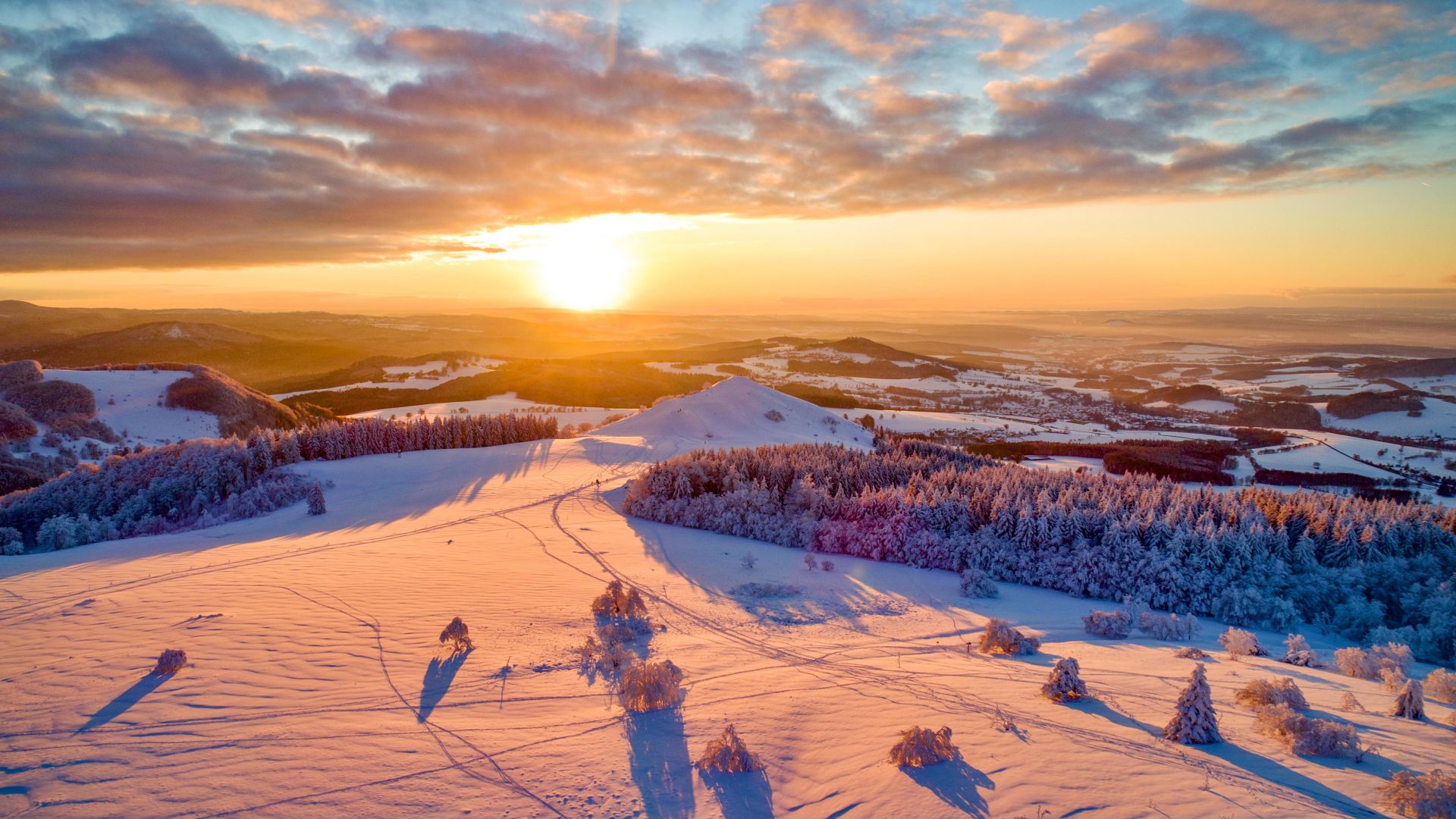 Gersfeld: View from the Wasserkuppe in the Rhön at sunset ©Feriendorf Wasserkuppe (Boris Kiauka)

When you think of Hessen, you might only think of the attractive financial metropolis of Frankfurt am Main. However, the Hessian landscape is also characterised by several mountain ranges and these mountains offer good winter sports opportunities. Whether cross-country skiing, snowboarding, tobogganing or classic skiing, in total, winter sports enthusiasts have around 60 kilometres of pistes at their disposal. The best-known winter sports areas include the Vogelsberg, the Odenwald, the Upland, the Rhön and the Taunus. The longest downhill slopes can be found on the 880-metre-high Grosser Feldberg, the highest summit in the Taunus region. The largest ski area is Willingen, here you can even ski when there is no snow. In addition, around 100 kilometres of cross-country trails await cross-country skiers. The area with the most reliable snowfall is the Wasserkuppe in the Rhön. The largest ski area here is Kreuzberg. 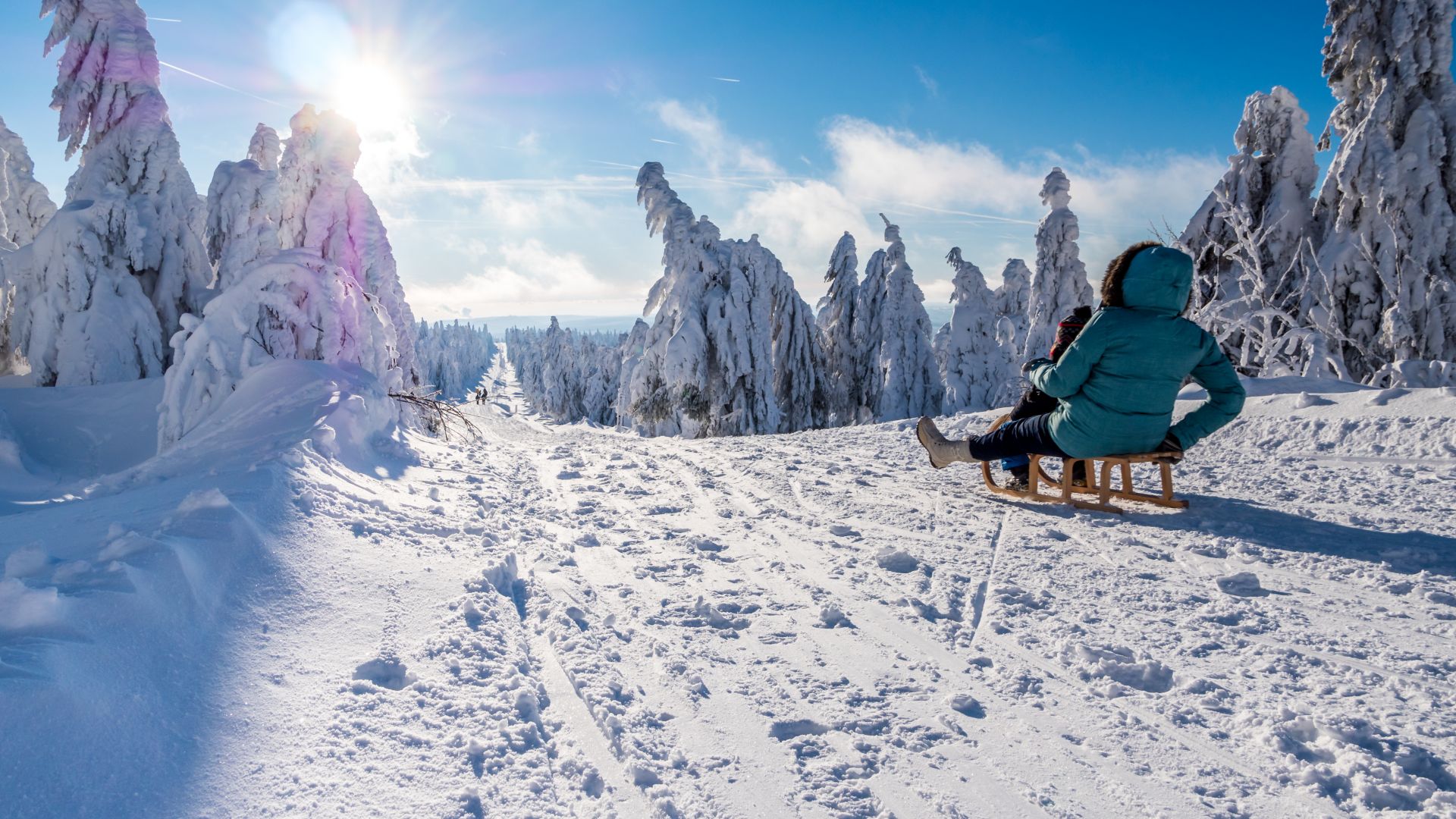 The federal state of Saxony is known for its many castles and palaces, its enchanting countryside and, of course, its state capital Dresden. But in Saxony you can also enjoy excellent skiing: Between Dresden and Nuremberg lie the Ore Mountains with Saxony's highest mountain, the Fichtelberg. The Ore Mountains are also great for hiking, but in winter the reliably snow-covered northern slopes are occupied by skiers. The slopes all around this 1,215-metre-high mountain are among the best in Saxony. Incidentally, this is also the location of Germany's highest town, the health resort Oberwiesenthal and the number one winter sports area in Saxony. In total, however, skiers have around 70 kilometres of pistes at their disposal. Winter sports destinations in the Ore Mountains also include Lößnitz, Oberlausitz and Schöneck. 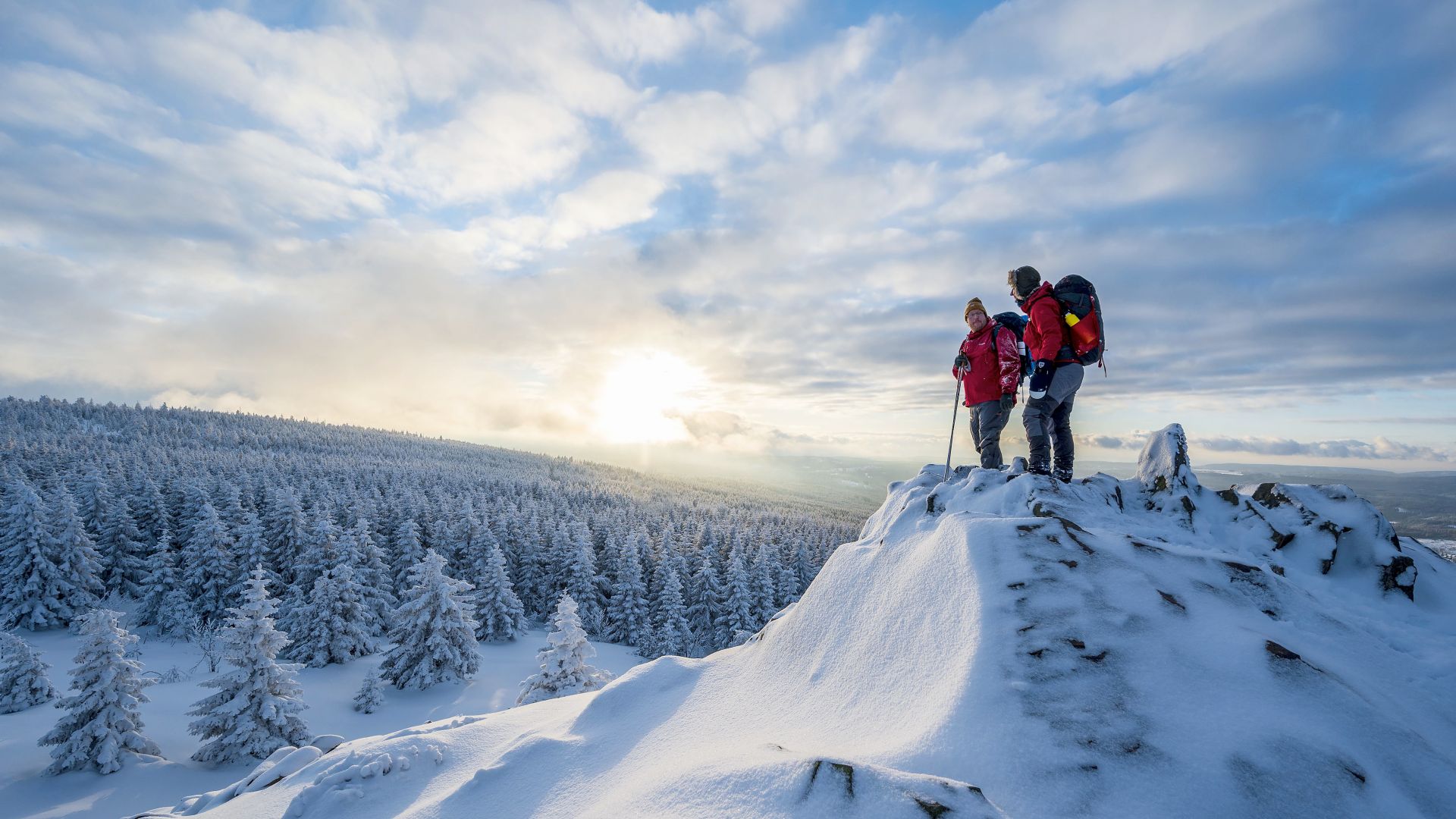 The pretty university town of Göttingen is as much a part of Lower Saxony as Wilhelmshafen on the North Sea and the low mountain range, the Harz. It is northern Germany's biggest winter sports destination. And even if the ski slopes in the northern low mountain range are not as long and steep as the Alps, even advanced skiers will find a number of challenging slopes here. A total of 13 alpine ski areas with 53 slopes, 39 toboggan runs and 500km of cross-country ski trails promise plenty of fun. The downhill run for example is particularly long at four kilometres on the Wurmberg, and a cable car leads to the ski centre near Braunlage. You will also find good conditions for skiing or snowboarding in the Upper Harz. Another cable car goes up the Bocksberg near Hahnenklee. There are also several ski lifts on the Sonnenberg near St. Andreasberg. The area around the Snow Dome in Bispingen is also popular. For those who prefer a leisurely ski trek, the snow-covered forests in the Harz Mountains are also ideal. 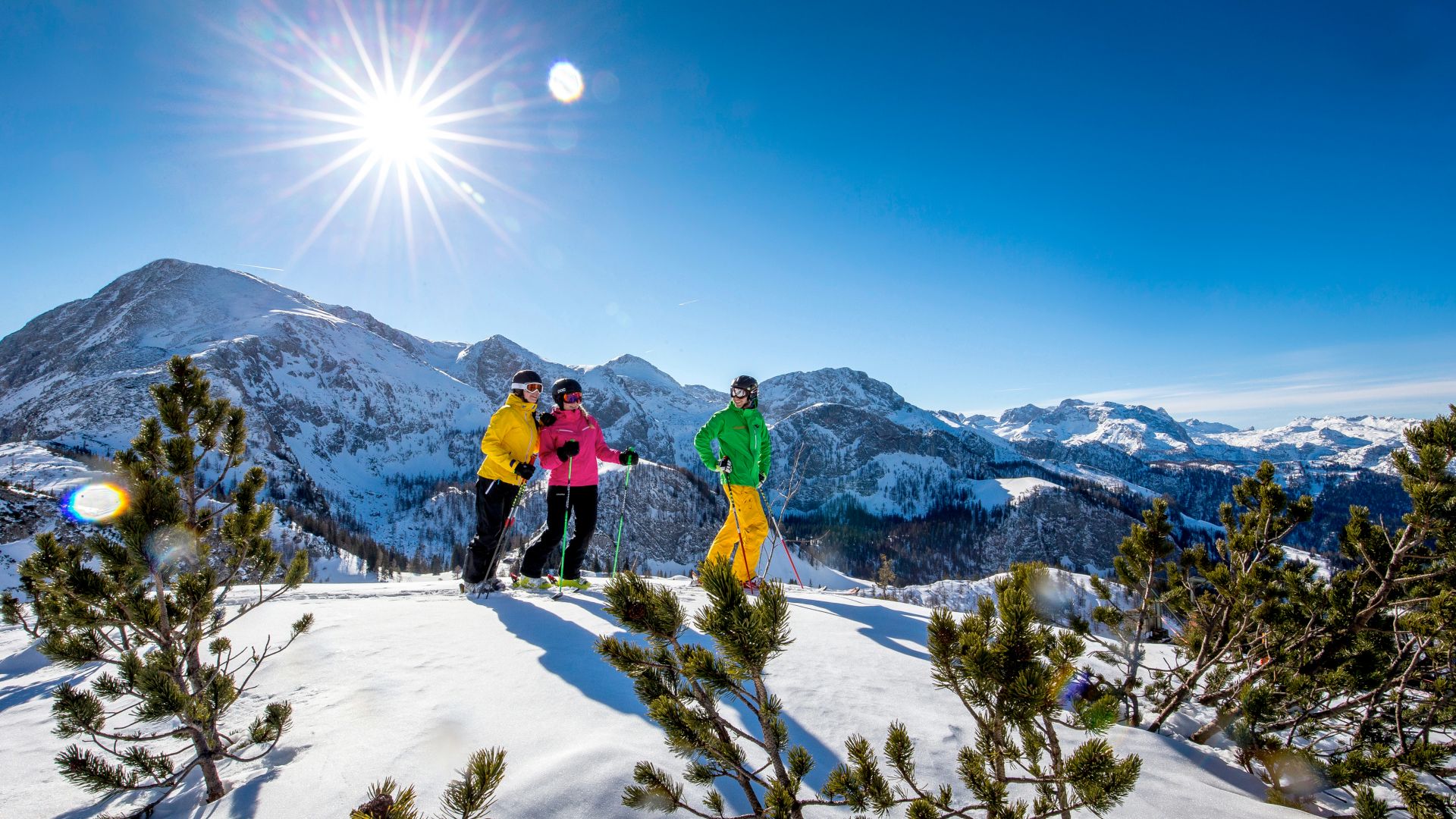 Zugspitze, Hochwanner, Watzmann: Germany's highest mountains are located in the federal state of Bavaria, most notably the 2962-metre-high Zugspitze. No wonder, then, that Bavaria is one of the most important winter sports regions of all. You can look forward to a good 843 kilometres of pistes and around 600 ski lifts. In Germany's highest skiing area around the Zugspitze in the Eastern Alps, 20 kilometres of pistes with guaranteed snow await you. By the way, you can travel up to the ski area by means of an 80-year-old cogwheel railway. Well-known ski areas include the Steinplatte/Winkelmoosalm ski area, Waidring/Reit im Winkel and the Arber ski areas. The Allgäuis also a great place for skiers. In the summer, you will find clear mountain rivers and lush meadows here, and in the winter, they are transformed into skiing paradises. The Zwei-Täler ski-area Ofterschwang-Gunzesried, for example, offers 18 kilometres of piste for both beginners and professionals. 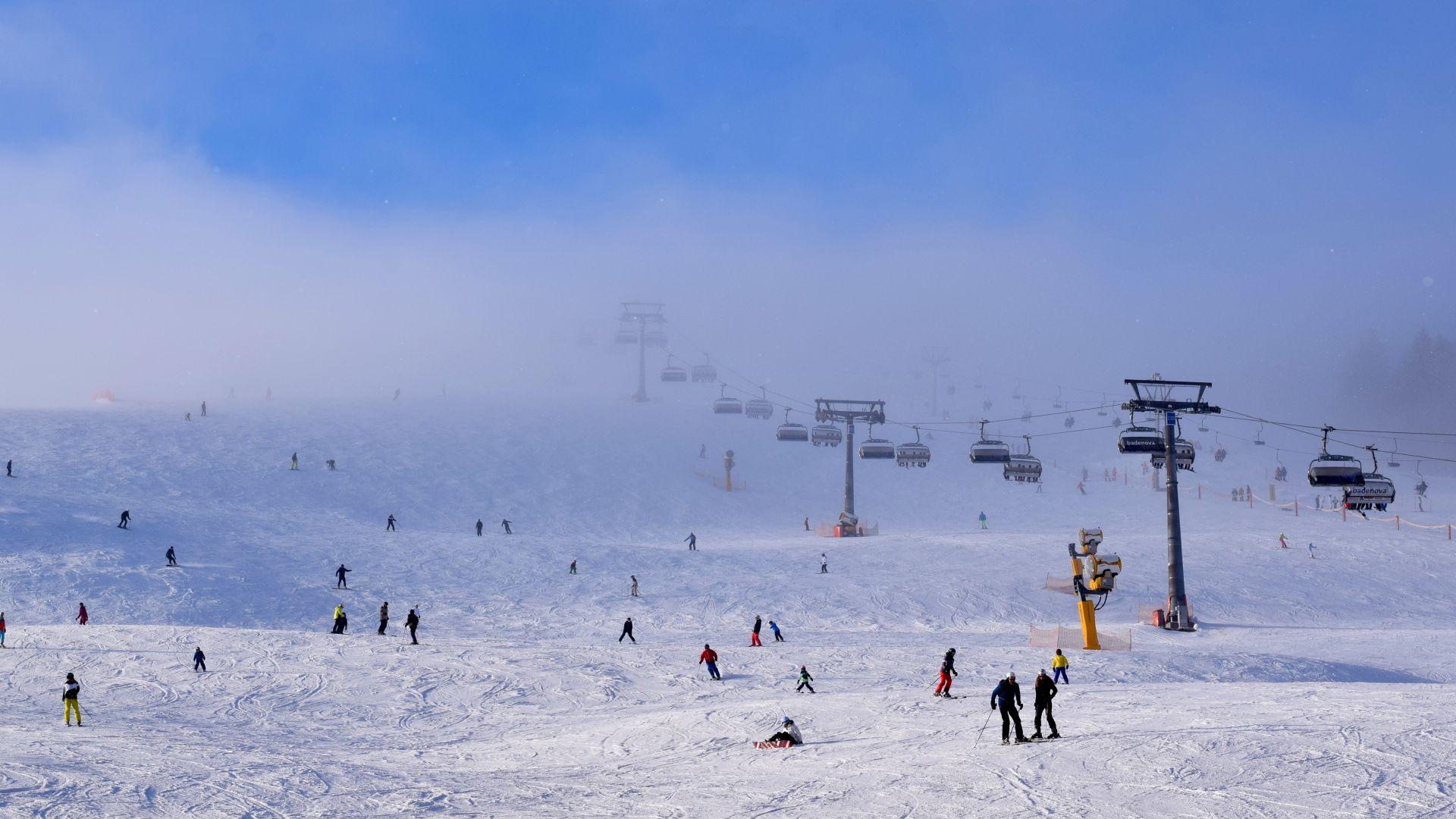 The Black Forest is located in the south of Germany on the border with France. Known for its picturesque villages and beautiful scenery, it provides the perfect backdrop for holidays in both summer and winter. Skiers are also in the right place here, as the Feldberg in the Black Forest is the highest mountain in Baden-Württemberg at just under 1500 metres, followed by the Herzogenhorn at around 1400 metres. Therefore, it is no wonder that the Feldberg is also one of the best ski destinations in the state. There are extensive and family-friendly ski slopes in Albstadt-Tailfingen, also for après-ski and snowshoe hiking. In total, Baden-Württemberg offers 229 kilometres of pistes and has around 300 ski lifts. The skiing areas Feldberg/Seebruck as well as Unterstmatt, Haldenköpfle and Hofeck are all very highly rated. A good place for families is Mehliskopf and the skiing area Salzwinkel. If you would like to spend a day ski-free, visit the city of Freiburg. Equally lovely: the pretty town of Calw. 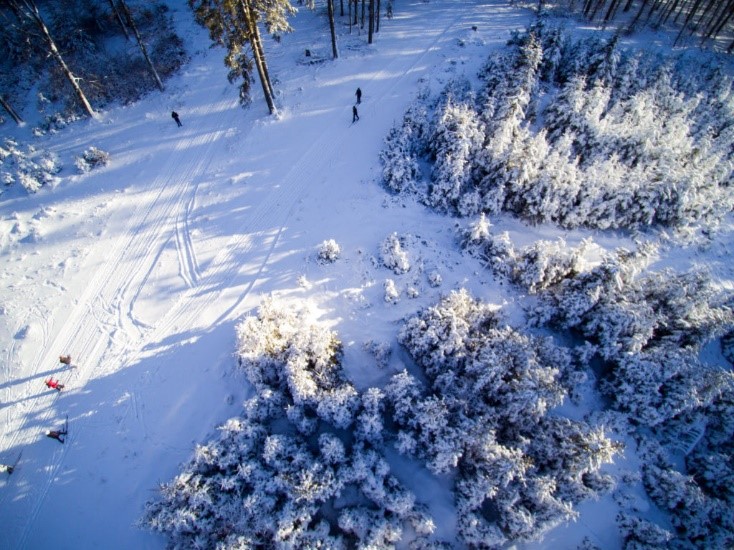 Particularly attractive for visitors is the Wintersports-Arena in the Sauerland, which stretches from the Sauerland to the Siegerland-Wittgenstein region. With over 120 slopes for skiing, snowboarding and sledges, the region offers the greatest snow fun north of the Alps. In most years, winter sports are possible from December to March on the slopes, most of which can be covered with artificial snow. However, skiing here is not only fun during the day. On 60 floodlit ski pistes there is still a lot of activity until late in the evening, prolonging the skiing fun. Even tobogganing enthusiasts can let off steam here on two of their own floodlit slopes. The cross-country skiing network of over 400 km also offers an incentive. The trails are groomed for classic and free technique. In addition to the winter sports arena, the Eifel and the Bergisches Land are particularly suitable for the whole family with their smaller ski areas and reasonable prices.