From Schinkel to Foster, Baroque to modern: Germany is a country of architecture. Architects left their mark here, Bauhaus was founded here and there is a wide variety of icons, both great and small, to choose from.

Take to the skies in Europe's fastest elevator. A sign next to the elevator's entrance provides all the key facts: the lift shoots 90.15 metres high at a speed of 8.5 metres per second. The whole thing takes just 20 seconds. Once at the top, the Panoramapunkt in the Kollhoff Tower on Potsdamer Platz, which was completed in 1999, offers spectacular views of the German capital. From the rooftop terrace, visitors can see Brandenburg Gate, the Victory Column and Bellevue Palace, the official residence of the German President.

Berlin, the city of architecture 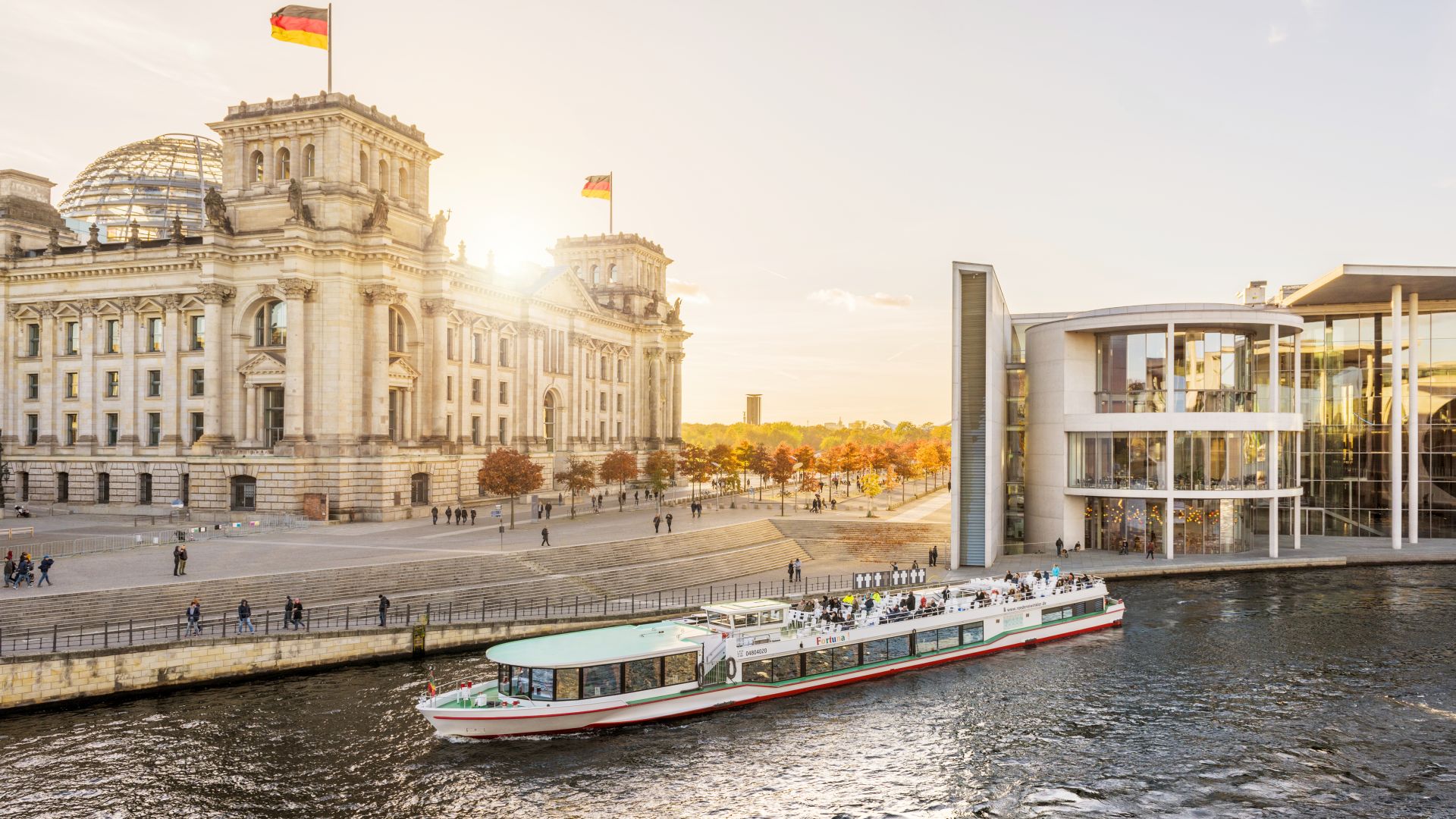 Berlin alone is a treasure trove for fans of architecture – there is more than enough to see on your next week-long stay in the capital, for example the French Cathedral on Gendarmenmarkt, one of the city's most beautiful squares, which is also home to the Deutscher Dom cathedral and the Konzerthaus concert hall. Or the ruins of the tower of the Neo-Romanesque Kaiser Wilhelm Memorial Church in western Berlin, which serves as a powerful reminder of war and destruction.

In Berlin, architect Karl Friedrich Schinkel designed the New Guardhouse (Neue Wache) and the Old Museum (Altes Museum) – both constructions are considered masterpieces in Neoclassical architecture. Sir Norman Foster is the brains behind the famous glass dome that sits above the plenary chamber on the Reichstag building, which once again became the seat of the German federal parliament after reunification. Visitors have been allowed to walk around the glass dome since 1999. And Bauhaus architect Mies van der Rohe created an icon of classical modern art with the New National Gallery. Among the capital's lesser-known buildings is the 65-metre tall Borsigturm building, which was opened in 1922 and is the city's oldest high-rise building, while the Lemke House, designed in 1932 by Mies van der Rohe, is a modest gem in the east of Berlin. 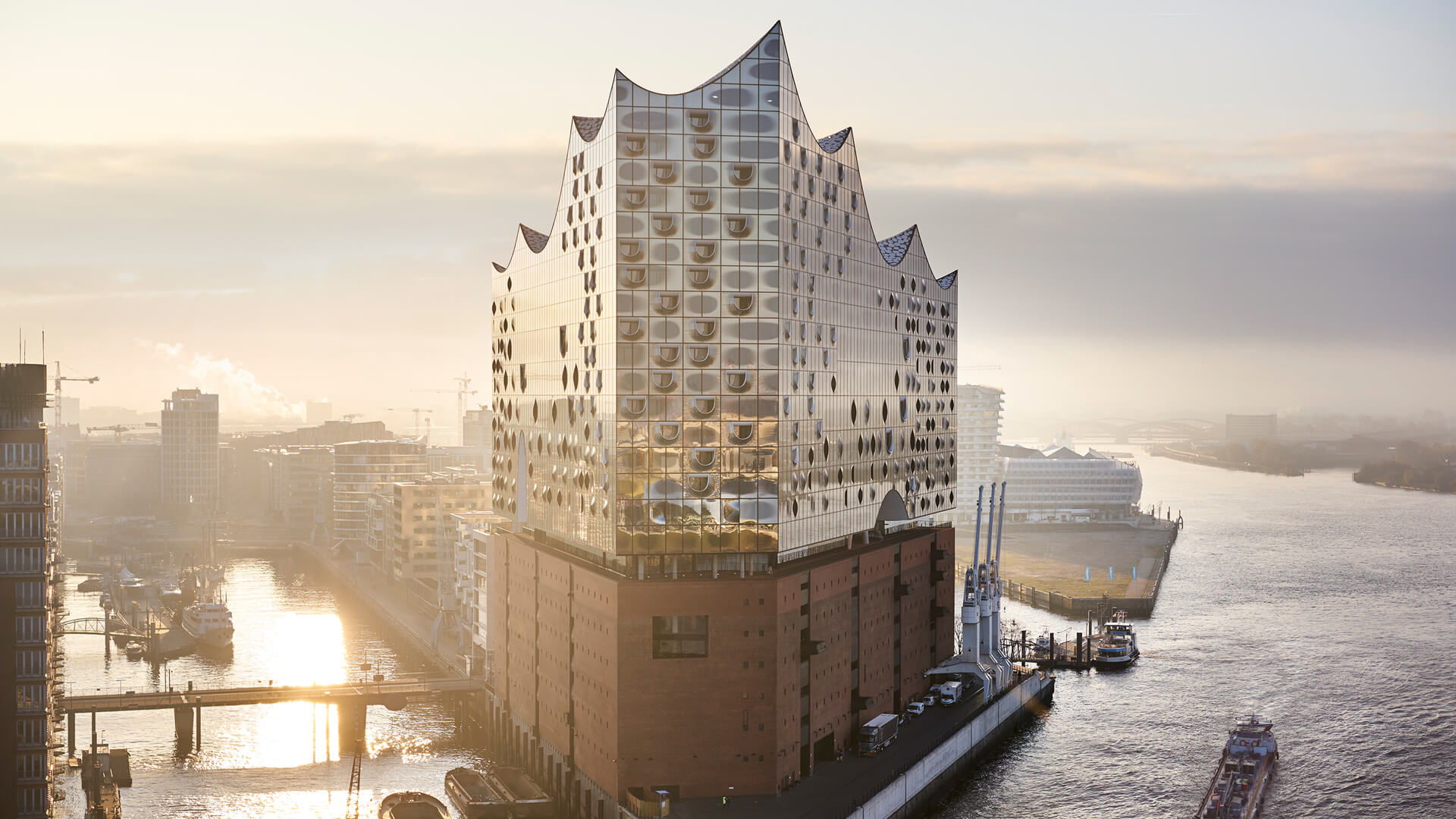 Hamburg's new landmark is the Elbphilharmonie, a concert hall with an impressive glass structure in the HafenCity quarter. It was opened in 2017 and is built on a former brick warehouse. An older flagship of Germany's second-largest city is the Chilehaus by architect Fritz Höger in the Kontorhaus District of the Old Town, now a UNESCO World Heritage Site. It is an impressive example of the German Brick Expressionism prevalent in the 1920s. It was built following a donation from a Hamburg-born businessman, who returned from Chile as a rich man and is said to have bought up 4.8 million bricks for the construction. The tip of the building looks like a ship's bow, and the structure is one of Europe's pointiest buildings. While the top floors are let out as offices, the inner courtyard is open to the public with shops, cafés and restaurants.

To see Hamburg's oldest building, you need to head to the island of Neuwerk in the Wadden Sea. It is more than 100 kilometres from Hamburg as the crow flies but belongs to the Hanseatic city. The island is home to a 700-year-old lighthouse that was once built to protect trade at the mouth of the Elbe river. The viewing platform boasts spectacular views of the mudflats.

For fans of half-timbered houses: Quedlinburg 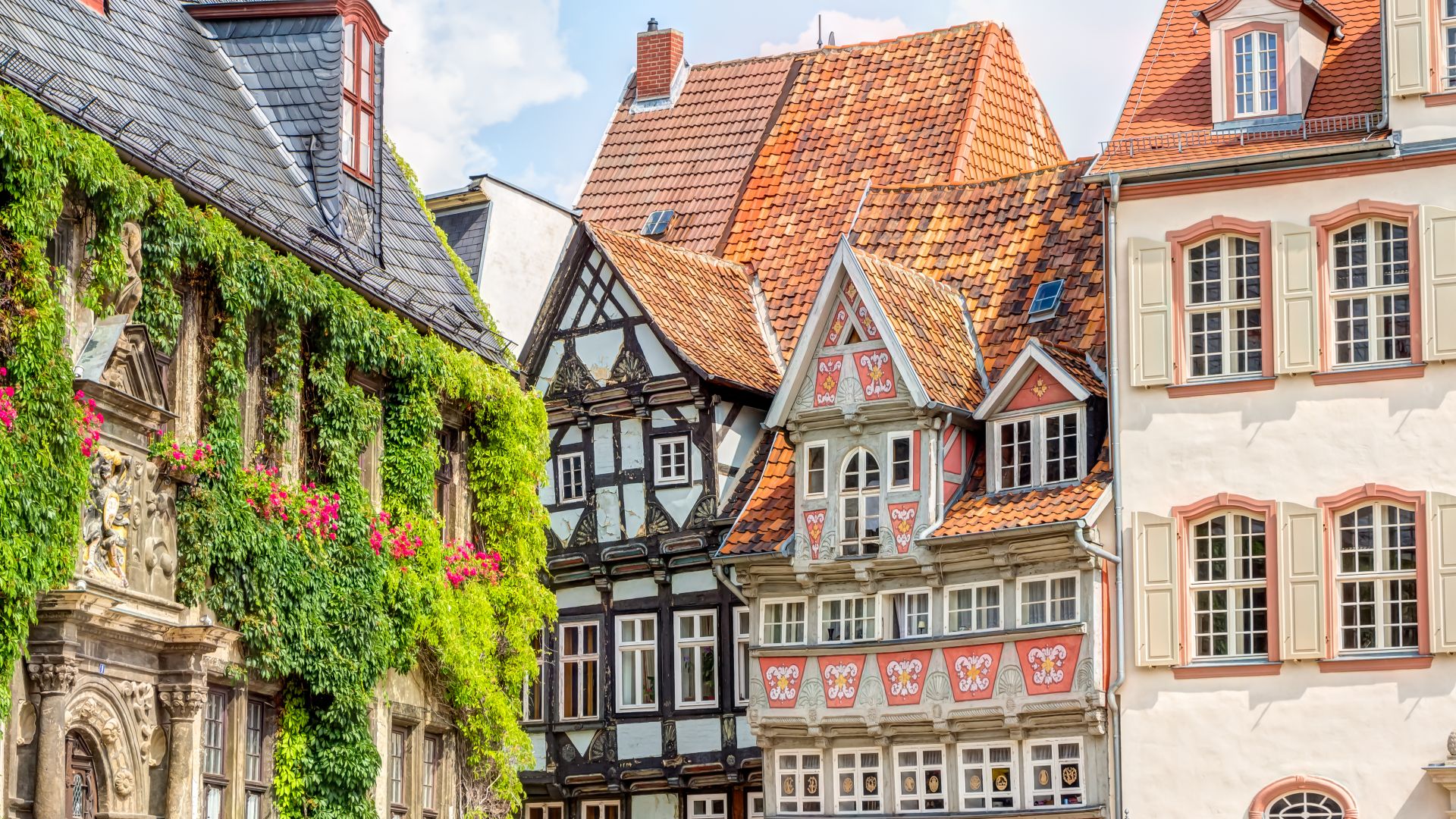 If you follow the Elbe upriver, and then the Saale and finally the Bode, you end up in Quedlinburg at the foot of the Harz mountains. This just goes to show that architectural gems can be found even in the German countryside. The town with a population of 24,000 is known for its Old Town. A walk through it will take you on a journey back in time to the Middle Ages. No other German town or city has as many half-timbered buildings in such a small space: at last count, there were 2,069 from six centuries. The structures in the medieval-style town were granted UNESCO World Heritage Site status in 1994. Visitors can book tours or visit the Museum for Half-Timbered Architecture in the Ständerbau stand construction.

If you are impressed by medieval architecture, you should also visit Nördlingen, a small town in Swabia, Bavaria. The 2.6 km long old, circular, roofed town wall dates back to around 1400, and visitors can walk along its entirety – something visitors to Germany can only do here.

Bauhaus at its best: Dessau 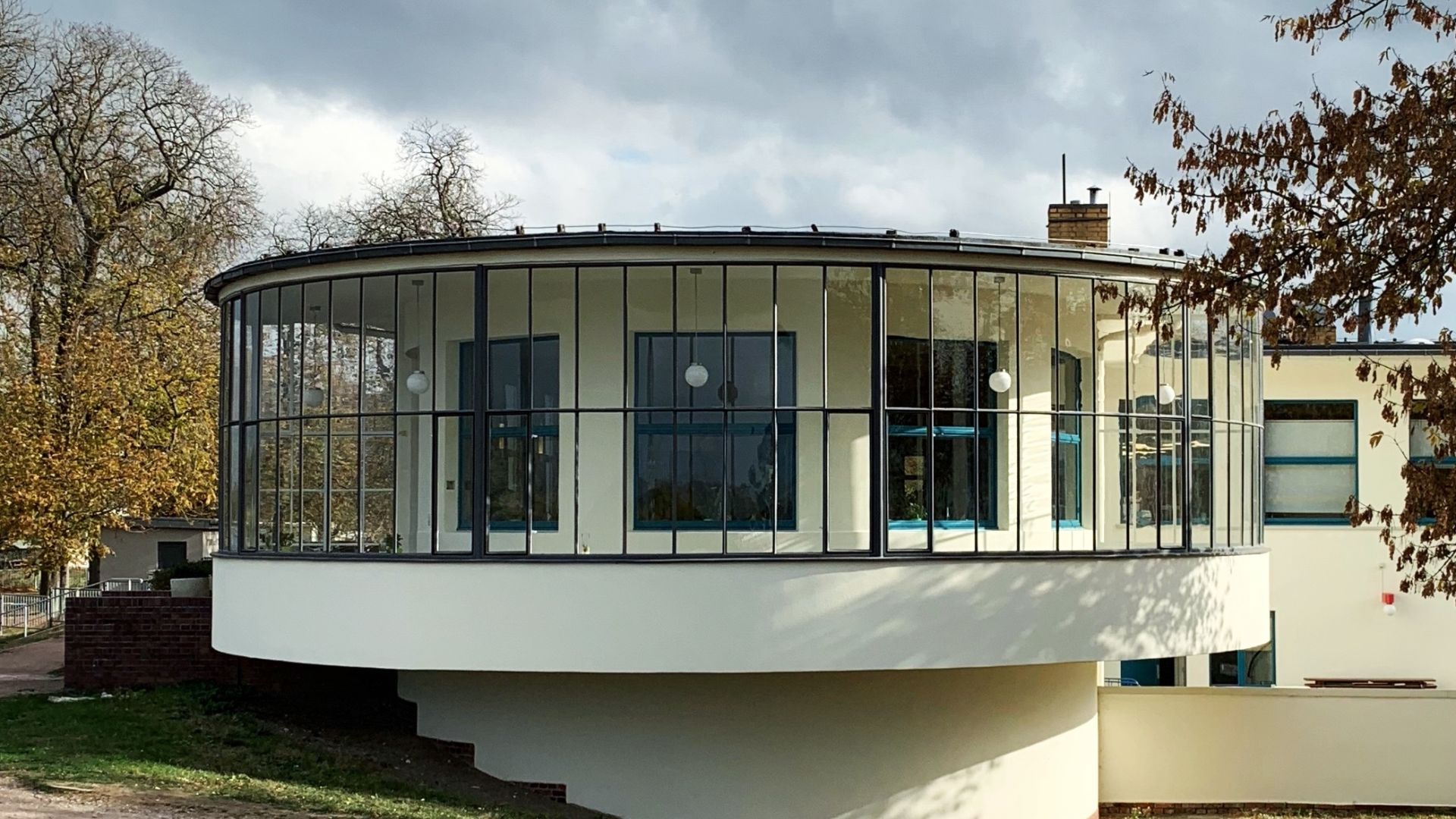 While we see the Middle Ages as a bygone era, Bauhaus heritage continues to have an impact on art, architecture and culture to this day. A large group of buildings from Walter Gropius' Bauhaus School, which was founded in Weimar in 1919, can be found in Dessau, a 90-minute drive to the south west of Berlin.

This is where Gropius had the Bauhaus Building constructed in the mid-1920s, alongside semi-detached residential buildings known as the Masters' Houses. These buildings are interlocking cubic structures; their rooms have been furnished with furniture by Marcel Breuer. Some of the first people to move in included Oskar Schlemmer, Wassily Kandinsky and Paul Klee and their families. There is also a building by Mies van der Rohe in Dessau: the Kiosk, which was demolished at one point but has now been reconstructed.

A feat of engineering: the Göltzsch Viaduct 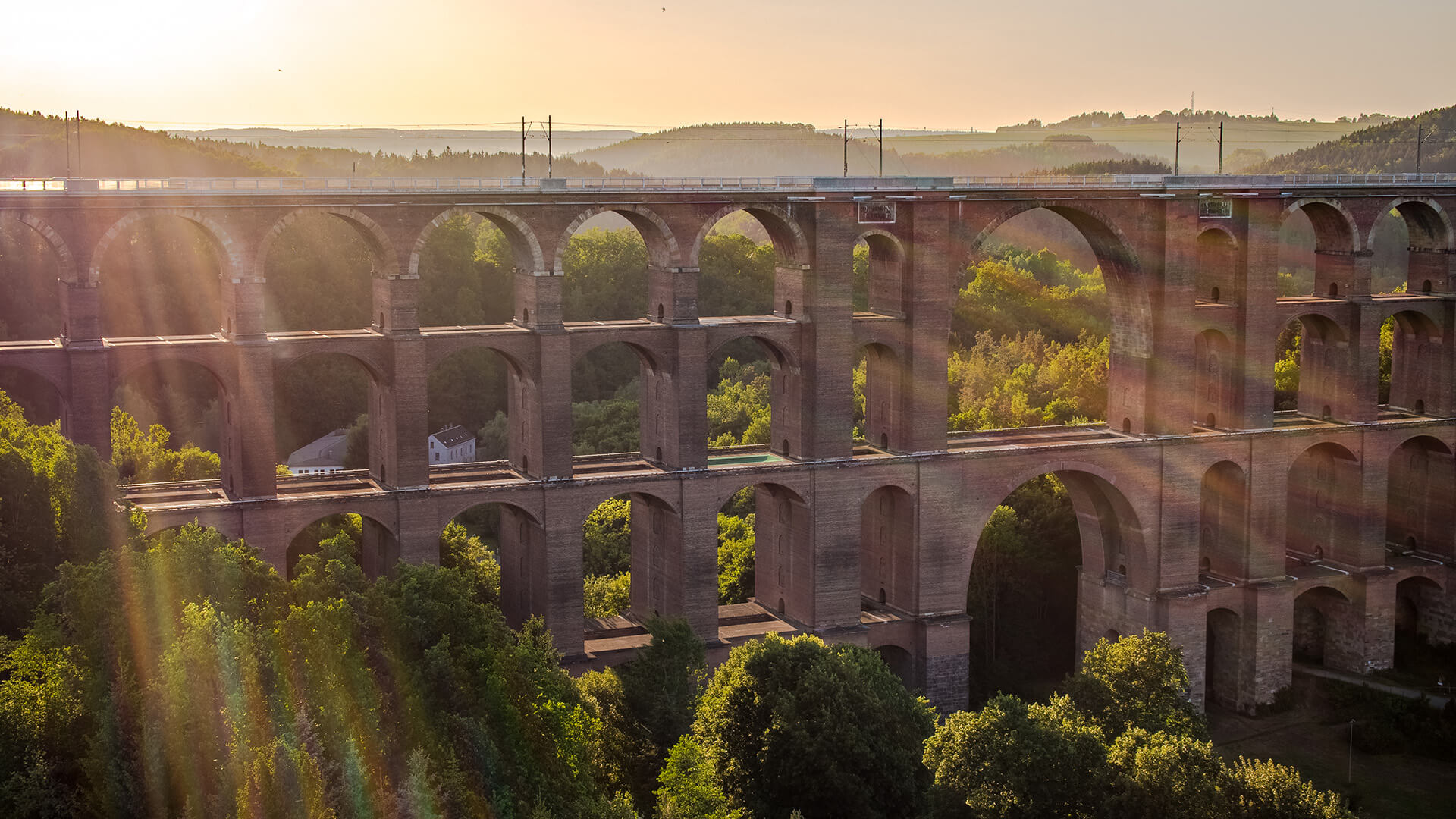 This feat of bridge engineering is the largest brick-built bridge in the world and has spanned a deep valley near Reichenbach im Vogtland, Saxony, since 1851. At the time of construction, the 78-metre high Göltzsch Viaduct was also the tallest railway bridge in the world. It was designed by German engineer Johann Andreas Schubert. Many hiking paths will take walkers along this construction with its umpteen arches. In the neighbouring town of Mylau, a tethered balloon soars 150 metres in the air for sensational views of the bridge. Perfect for big events. 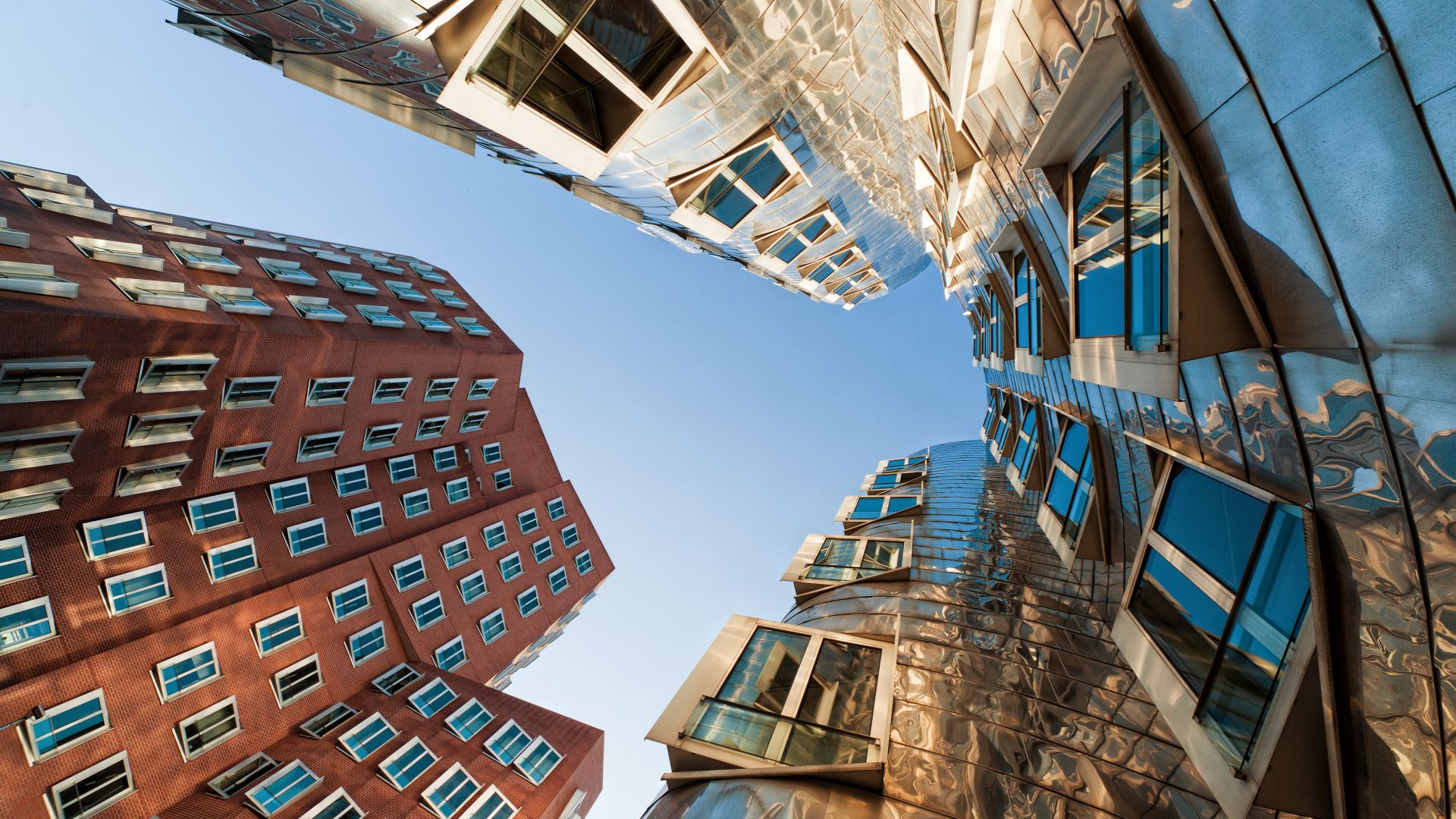 There's no better place to experience what it must have felt like to live in the avantgarde houses of the 1930s than the Schminke House in Löbau in Upper Lusatia in the eastern tip of the country. The organic building, which was designed by Hans Scharoun for a couple who owned a pasta factory, is one of the most famous houses of the modern era. Nicknamed the Noodle Steamer, the masterpiece offers something that other architectural gems often don't: you and your family can check in and stay here during your trip to Germany.

Other major German cities alongside Berlin and Hamburg also have architectural treats on offer: Düsseldorf is the home of Frank O’Gehry's leaning and curving buildings; Munich has the Allianz Arena by Jacques Herzog and Pierre de Meuron with its brightly lit ETFE-foil air panels on the facade, while Frankfurt am Main boasts Europe's tallest skyscraper, the Commerzbank Tower conceived by Sir Norman Foster. Dresden attracts visitors with its treasure trove of Baroque buildings, including the Zwinger palatial complex, the Gewandhaus – once a cloth hall, now a hotel – and the reconstructed Church of Our Lady.

But watch out! Don't be confused by the name. In Germany alone, there are just under 200 churches dedicated to Mary, so they are also called the Church of Our Lady. Having said this, some of their architecture from the 20th century is interesting. The red sandstone Maria Königin in Saarbrücken, for example, was designed by architect Rudolf Schwarz, one of the most important church builders in West Germany after World War II.